Recruiting for a cause 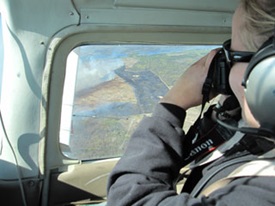 Pilots attending the July 12 AOPA Fly-In in Plymouth, Massachusetts, will have a chance to meet personally with a nonprofit group founded to help general aviation protect the planet.

Celebrating 35 years of supporting environmental conservation with general aviation, LightHawk is a nonprofit organization that matches donated aircraft time and skilled pilots who fly scientists, photographers, and other media professionals on missions that include wildlife census, observation and documentation of coastal and inland conservation areas, and storytelling that highlights the challenges and successes of conservation efforts.

AOPA has documented some of LightHawk's efforts in recent years, including missions to track endangered whooping cranes in Wisconsin, flamingos in Mexico, and photography that captured restoration efforts in the Colorado River Delta.

Working across the country, as well as in Canada, Mexico, and Central America, the organization arranges missions that monitor, document, and educate the public about conservation projects, climate change, energy use, and the management of natural resources. More than 230 pilots volunteered their time in the past year, flying more than 400 missions. The organization has one more reason to celebrate this year, having landed a $10,000 grant from the AOPA Foundation; it is one of 10 organizations supported by the inaugural awards from the Foundation’s Giving Back program.

The Foundation launched the Giving Back program to help fund flight training scholarships and to make small grants to charities doing good work through general aviation. The program is funded solely through donations to the AOPA Foundation and not with membership dues. The program has resulted in positive publicity for GA in media outlets across the country.

LightHawk will put its grant to work recruiting more volunteer pilots, and that mission will include a visit to the July 12 Fly-In.

“Events like the Plymouth [Fly-In] are a great chance to meet qualified pilots and engage them in our work locally,” said LightHawk Pilot Outreach Manager Greg Bedinger, in a news release. “LightHawk volunteer pilots in the Northeast have opportunities to survey eelgrass beds in Cape Cod Bay, use aerial telemetry to spot wildlife such as black bears, and assist their local land trust to name just a few.”