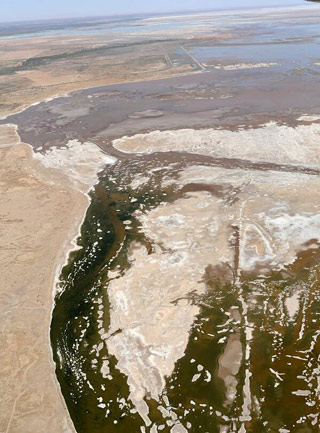 When a project to restore the delta-turned-desert at the southern end of the Colorado River reached a key milestone in May, volunteer pilots from the conservation nonprofit LightHawk had flown more than 100 missions that were "critical in energizing the push" to revitalize the ecosystem.

The enormity of the task in progress in the Colorado River Delta is hard to fathom. The river that flows 1,450 miles from Rocky Mountains headwaters down through the Grand Canyon toward the Gulf of California had become so dammed and diverted that for many years it never actually reached its destination, said news accounts. Its delta, in Mexico, had shrunk by 90 percent, but research showed that recovery was possible, with careful planning and a lot of cooperation.

That cooperative project is now in progress. This month, under a five-year experiment in releasing measured amounts of river water, the Colorado River flowed to the Gulf of California for the first time in 16 years, according to an article posted to the online National Geographic News Watch, which hailed the event as a “sacred reunion.”

On May 16, LightHawk celebrated "history being made" toward the restoration goal for which the aviation organization has flown numerous missions since 2009.

"These flights were critical in energizing the push to restore this remarkable ecosystem and publicize the benefits of nurturing this neglected area," said LightHawk in a news release.

The aerial missions supported partner organizations including the Sonoran Institute and Raise the River, enabling decision makers, news media, and members of the community to appreciate the delta’s remote reaches, LightHawk said. LightHawk estimated the value of flights donated by some of its 200 member pilots, and other donated professional services, at $115,000.

"With the help of LightHawk, we are able to see the Colorado River Delta as a whole," said Francisco Zamora Arroyo, director of the Sonoran Institute’s Gulf Legacy Program. "While our projects cover many parts of this region, it is from the air that their connections are truly understood."

Dan Namowitz has been writing for AOPA in a variety of capacities since 1991. He has been a flight instructor since 1990 and is a 35-year AOPA member.
Go to Dan Namowitz's Profile
Topics: Public Benefit Flying, Aviation Industry, Ownership