Get the app Get the app
Already a member? Please login below for an enhanced experience. Not a member? Join today
News & Media Cranberry country

Hoisting 600 pounds of cranberries beneath a Bell 47 helicopter (a load that represents about 20 percent of the helicopter’s maximum weight) is tricky work, particularly when the weather is less than ideal, as John Ryan will tell you from extensive personal experience.

“It takes quite a bit of training to get somebody to where they’re not going to kill themselves,” Ryan said, adding a few other adjectives, including, “hairy [expletive].”

It was a mission that Ryan could not resist. 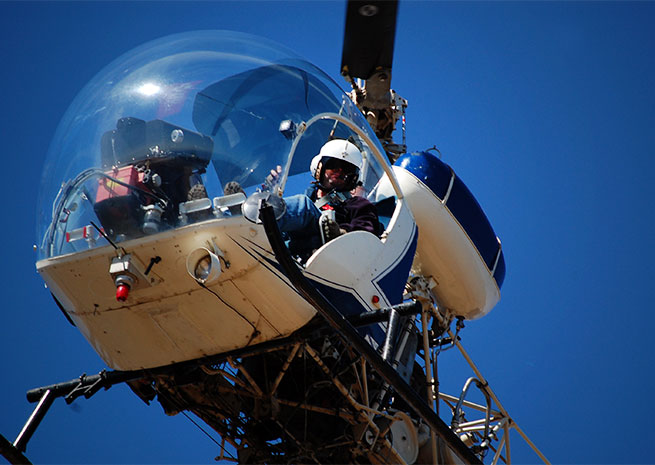 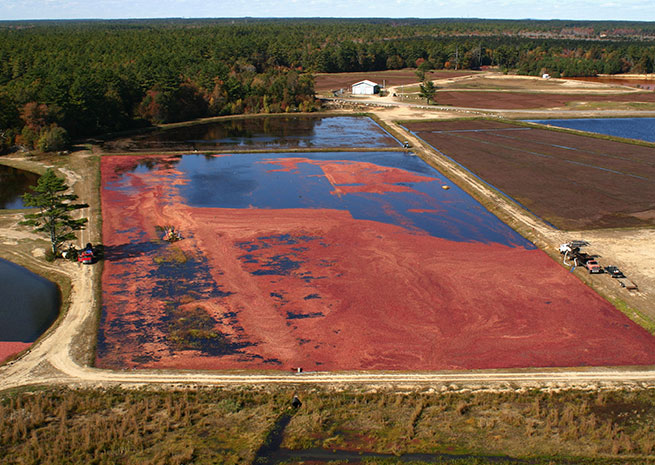 In 1987, working for a Huey operator as a ground crew member, Ryan spotted a Bell 47 with spray gear working low over a nearby cranberry bog, dropping to the treeline to make a pass then rising quickly and rotating to line up for the next pass. Two days later he was knocking on the door of that Bell 47’s owner. Ryan was by then a helicopter pilot with 290 hours under his belt, and a strong desire to join the ranks of the cranberry pilots.

Not one to give up on a tantalizing mission, he returned the following spring with 310 hours (and a commercial helicopter pilot certificate), and took a job sweeping floors, loading fertilizer, and whatever else needed doing at Plymouth Copters—for $6.50 an hour. He flew with the company’s experienced staff pilots on repositioning flights, and spent a year and a half getting on-the-job training before earning a chance to check out with the chief pilot. In 1989, the coveted approval was secured, and Ryan landed his first flying job, launching a cranberry flying career that is still going strong. In 1994, when Plymouth Copters went out of business, Ryan leased one of the Bell 47s and launched Ryan Rotors. 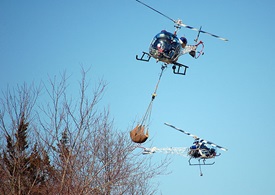 Cranberries are big business in Massachusetts, which produced 2.1 million barrels of the red berries in 2012, according to the latest federal data. That’s nearly a third of the nation’s output, and ranks Massachusetts second only to Wisconsin, which produced 4.5 million barrels (100 pounds of berries in each) in 2012. Keeping that cranberry sauce (and juice, fresh berries, and other products) coming requires a coordinated effort and careful management of the vulnerable bogs and fields where cranberries are grown. Helicopters have long played a crucial role in every phase of the growing cycle, including bog maintenance and preparation, aerial applications, harvest, and post-harvest bog maintenance. While more expensive than driving trucks into the bogs, helicopters spare the delicate fields from damage.

Ryan is one of five helicopter operators based at Plymouth Municipal Airport in Plymouth, Mass., home of the AOPA Fly-In July 12, and a close-knit community of aviators who work together to promote their airport, as well as the general aviation community they love. Cranberry growers account for about 70 percent Ryan Rotors’ business, Ryan said, though the overall demand for helicopter support has declined sharply in recent decades as farmers have adopted new methods, and reduced fertilization and other applications during the growing season. The airport once supported a dozen cranberry hauling helicopters; today Ryan operates a pair of Bell 47s, and a Robinson R-44 primarily used for sightseeing and photography missions, though it can also be used for external lifts (including golf ball drops for charity, which has become another Ryan specialty). 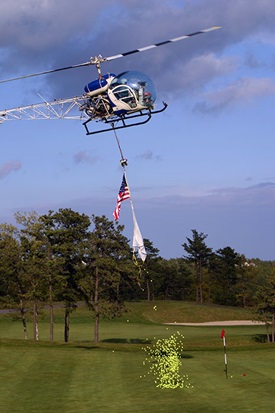 The five rotorcraft operators include the Massachusetts State Police and Boston MedFlight, which maintains a base at Plymouth Municipal. Ryan Rotors offers agricultural and sightseeing flights, and ball drops for charity or corporate events; New England Helicopter Academy specializes in flight training, and Heliops LLC offers charter services including photography missions in a Eurocopter EC120 that has flown cameras for the likes of Discovery Channel and National Geographic. Heliops owner Wes Verkaart also caught the flying bug young, thanks to a Bell 47 ride at age 8, but spent 30 years supporting his family as a designer of medical devices before switching careers following his youngest son’s college graduation: He earned a commercial certificate and bought the aforementioned EC120, and is celebrating 10 years in business with a fly-in party in June. Verkaart, Ryan, and Richard Smith, who founded New England Helicopter Academy in 2002, work together in more ways than one: They refer customers to one another, and even share pilot duties on some missions.

“We work back and forth,” Verkaart said. The entire airport community, from the town’s airport commission, to the municipal staff that manages the airport, to the pilots, operators, and clubs, collaborate to promote aviation, the airport, and charitable pursuits including a biennial airshow that supports a Plymouth Aero Club scholarship program, and the Cars and Copters event cofounded by Verkaart and a local auto enthusiast in 2009 that has drawn thousands of attendees to the airport and benefits the Jimmy Fund. 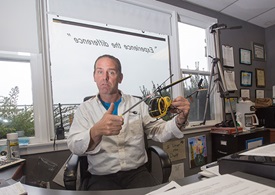 Smith’s Part 141 school has three instructors (including Smith) who keep a pair of Schweizer 300s busy teaching students, about half them rookies, and the other half fixed-wing pilots looking to add a rotorcraft rating, Smith said. He is working with AOPA event staff to coordinate introductory lessons and sightseeing flights during the July 12 Fly-In (weather and logistics permitting), with details to be announced. Smith said that first lesson is a no-pressure situation, designed to give pilots or nonpilots a feel for the basics.

Smith himself was introduced to helicopters flying radio-controlled models, and said that is a good way to get a feel for the control sensitivity. Giving RC a try is a good way to begin the transition to rotorcraft, Smith said.

All of those helicopter operations (which also include occasional visits by military and U.S. Coast Guard operators who drop in for lunch, or a few touch and goes) might seem like a potential problem, but the operators said it actually helps to be among the state’s most active rotorcraft fields. Local fixed-wing pilots get well-accustomed to working with their whirlybird counterparts, and airport manager Tom Maher and his staff do an excellent job keeping everything running smooth, according to every pilot interviewed during recent visits and phone conversations.

“I think we all play well together,” Verkaart said.

The three commercial helicopter operators based at Plymouth Municipal are working with AOPA staff to plan sightseeing and introductory flights in locally based helicopters during the AOPA Fly-In July 12. Details (including prices and reservation information) will be posted online as soon as they are finalized. Watch for more information in upcoming issues of AOPA ePilot and online.