Honda Aircraft Co. test pilot Warren Gould logged 84 minutes in the first production model of the new twinjet on June 27, an uneventful flight to 15,500 feet that ended with a celebration: More than 1,000 company employees greeted the arriving flight upon its return to the factory in Greensboro, N.C.

“With this first flight, the HondaJet program has entered the next exciting phase as we prepare for delivery,” Honda Aircraft Co. President and CEO Michimasa Fujino said in a news release. “Today’s celebration is the culmination of extensive engineering and production efforts, and this is an important achievement in bringing the world’s most advanced light jet to market.” 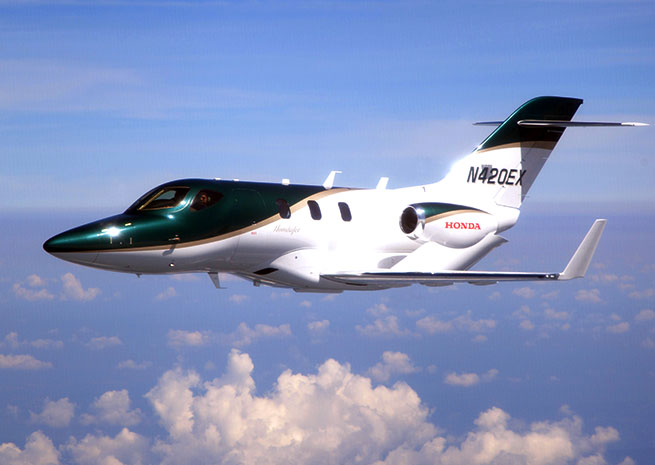 The $4.5 million jet (a price long since announced and not updated in recent years) features over-wing mounted engines, a configuration patented by Honda that reduces drag and noise, and increases fuel efficiency. The GE Honda Aero HF 120 turbofan engine was certified in late 2013 after engineers overcame setbacks on ice ingestion tests that delayed the program. Progress has been smoother since, and FAA certification testing is underway with first deliveries expected in early 2015.

Gould’s mission profile included checks on handling characteristics at various speeds, and checks of various systems including avionics, flaps, landing gear, and speed brakes. The flight reached a cruise speed of 385 knots, though the aircraft’s maximum cruise will be 420 knots, with a maximum altitude of 43,000 feet and an operating range of 1,180 nautical miles with IFR reserves. The HondaJet is being certified for single-pilot operation.

The first production aircraft was unveiled in May, sporting a deep green paint scheme that is among five color options being offered.