Get the app Get the app
Already a member? Please login below for an enhanced experience. Not a member? Join today
News & Media Supersonic jet concept supersized

Aerion Corp. has extended the length—and the legs—of its supersonic business jet based on popular demand. The Reno, Nev., company working to bring a Mach 1.4 business jet to market announced at the European Business Aviation Convention and Exhibition new market research that drove the decision to extend the dimensions of its concept jet to afford more elbow room inside, add an engine, and extend the fuselage length to 160 feet.

The company, which worked with NASA testing supersonic airfoils in 2013 is financing its own research-and-development effort, with an eye on bringing the jet to market in “or about” 2021. 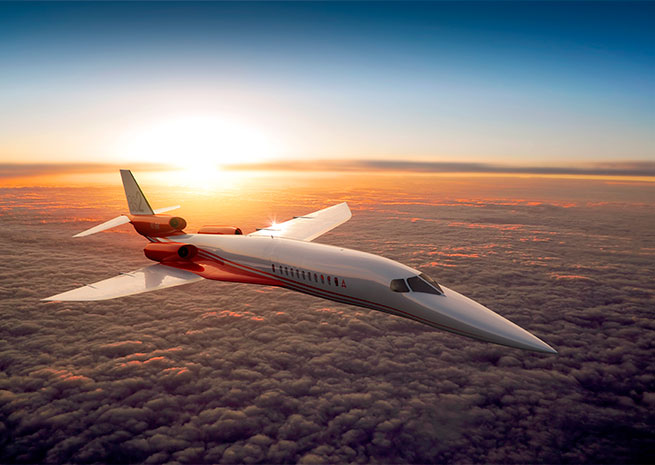 Aerion was formed in 2002 from an engineering group that has been working for more than 20 years on the concept, and is working to choose which powerplant will be slotted into the three-engine configuration. A market survey completed in the first quarter of this year concluded that the demand exists to support 600 aircraft purchases over 20 years, that operators want a range of at least 5,000 nautical miles, and they are willing to pay more than $100 million for such an aircraft.

“That is the supersonic jet we are working to deliver,” CEO Doug Nichols said in a press release.

Aerion is not alone in the effort to break the business jet sound barrier. A British firm led by Richard Lugg has been working for years to develop the SonicStar, which aims to shatter the sound barrier in near silence using engines that run on a massive electrical charge, with electricity to spare for another revolutionary technology that aims to reduce the sonic boom that currently limits flights over most populated areas to subsonic speeds. (Noise was a major factor that limited Concorde's commercial viability.) NASA has also been doing research on the next generation of supersonic civilian aircraft, with a goal of reviving that paradigm in 2025.

Aerion has not announced a boom-mitigation strategy, and notes in its press announcement that the jet will have two cruise “sweet spots,” one at Mach .95 for “efficient cruise where supersonic flight is prohibited,” and another at Mach 1.4, with fuel efficiency at both speeds comparable to current business jets. The Aerion AS2’s maximum speed will be Mach 1.6. The company expects that a sub-100,000-pound takeoff weight will still allow for transcontinental flights, using runways shorter than the 7,500 feet required at maximum weight.