Get the app Get the app
Already a member? Please login below for an enhanced experience. Not a member? Join today
News & Media States value aviation 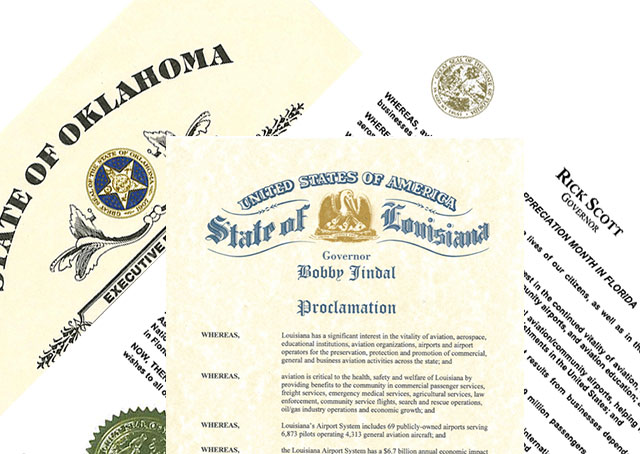 Three more states—and several communities within one of those states—have issued fresh proclamations recognizing the value of aviation, and the jobs and opportunities it creates, among other benefits. In Florida, Louisiana, and Oklahoma, proclamations issued in recent weeks help frame a conversation that often leads to substantive changes that reduce the cost of flying and increase opportunities for communities to thrive.

Georgia became the first state to recognize aviation’s many contributions in 2009, and all 50 states had taken the same step by 2014. AOPA Northwest Mountain Regional Manager David Ulane noted in 2014 that the increasing number of local proclamations extend awareness to those local officials who play a direct role in supporting airports, aviation businesses, and other critical infrastructure. Those proclamations also raise awareness among members of the nonflying public that they, too, benefit directly and indirectly from their local airports and associated businesses, even if they never set foot on the ramp.

Ulane, celebrating Utah’s most recent proclamation, noted that AOPA was mentioned by name, and urged members to thank lawmakers for recognizing the value of aviation. AOPA Central Southwest Regional Manager Yasmina Platt had the same message for members in Oklahoma following Gov. Mary Fallin’s signature in March of a proclamation that recognizes the $1.2 billion in economic activity, along with the positive impact on quality of life, health, and essential services made possible by aviation.

Platt also thanked Louisiana Gov. Bobby Jindal for recognizing the 58,900 jobs and $6.7 billion in economic activity (including $3.3 billion spent by air travelers) created in his state. Local communities in Louisiana also joined the growing list of cities and towns expressing their appreciation, with proclamations issued by mayors in Baton Rouge, Hammond, New Iberia, and Ruston, each noting that general aviation alone accounts for nearly $1 billion in economic benefit and supports thousands of jobs across the state.

Platt sent personal notes of thanks to all of those state and local officials, and encouraged members to follow suit.

Florida Gov. Rick Scott reiterated his state’s appreciation of the $144 billion in economic activity associated with aviation, noting that 8.5 percent of the state’s total economic output comes from businesses that depend on aviation. The state, Scott proclaimed, “has a significant interest in the continued vitality of aviation, aircraft and aerospace manufacturing, commercial service and community airports, and aviation education.”

For those whose states have not yet renewed their official recognition for 2015, there are many persuasive arguments to be made. A new study by PricewaterhouseCoopers released in February calculated $219 billion in national economic output attributable to GA alone. It is worth highlighting that while commercial airports and airlines may be more visible to the public, GA is critical to many small businesses and creates opportunities for many communities to connect to the world economy.