Get the app Get the app
Already a member? Please login below for an enhanced experience. Not a member? Join today
News & Media General aviation, added up 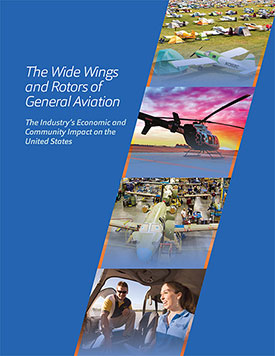 General aviation adds up to 1.1 million jobs and a significant contribution to the U.S. economy—$219 billion, according to a study released Feb. 11.

GAMA Chairman Joe Brown, president of Hartzell Propeller, Inc., and GAMA President and CEO Pete Bunce presented the study’s findings to a standing-room-only audience in the Newseum’s Knight Studio in Washington, D.C. Leaders of almost all of the industry organizations were in attendance.

PricewaterhouseCoopers crunched the latest available data and the resulting report, “The Wide Wings and Rotors of General Aviation,” clearly illustrates economic and other benefits of GA enjoyed by the nation as a whole.

GAMA wanted to refresh the economic impact study in advance of the FAA’s reauthorization in Congress this year, Bunce said.

The study contains details that will be well-known to many within the industry, though the magnitude of GA economic output may surprise some, along with where it comes from. Connecticut ranks second in the nation in total GA economic output, and in terms of GDP per capita. In terms of total jobs attributable to GA, California, Texas, and Florida lead the way. The report tells the story of corporations large and small, and also details vital services including emergency medical transportation, accessing natural resources, and helping nonaviation businesses operate more efficiently and profitably.

“This industry study provides solid evidence of the continuing importance of general aviation to our nation’s economy,” said AOPA President Mark Baker. “When we create an environment that supports general aviation activity, we create jobs, grow the economy, and enhance the freedom to fly within our national transportation system.”

The study was released on the same day that the General Aviation Manufacturers Association reported its latest annual shipment and billing data from member companies, a mixed bag of encouraging and troubling news for the industry. GA airplane production worldwide accounts for $24.5 billion in revenue, according to the report, with helicopter makers adding another $4.9 billion despite having endured a difficult year. The new study goes far beyond aircraft shipments and billing, detailing with data and examples the many ways GA helps grow the economy.

“This important new study confirms our industry’s strength and resilience. It clearly shows that general aviation positively affects economies and communities in all 50 U.S. states,” said GAMA President Pete Bunce. “Our industry-wide workforce provides the lift for our wings and rotors, and these high-quality, good-paying jobs have a tremendous impact on the U.S. economy.” 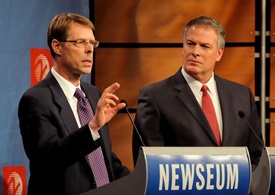 National Business Aviation Association President Ed Bolen said the study also documents the vital role GA plays in moving people and goods. It includes personal stories, like that of Restaurant Equipment World’s President and CEO Brad Pierce, who counts on his airplane to facilitate face-to-face contacts that are vital to growing his third-generation family firm with 45 employees.

“This study highlights a very important reality, and one that is often overlooked: General aviation plays a central role in our nation’s economy and transportation system, and provides an essential service to citizens, companies and communities across America,” Bolen said. “The report will be highly valuable in our ongoing work to educate policymakers and opinion leaders about the size and significance of general aviation in America today, and NBAA is proud to partner with GAMA in producing it.”

AOPA was among eight organizations supporting the study, which is at its core an effort to better equip advocates from each of the groups to educate policymakers about the benefits and challenges faced by the industry, and encourage policies that promote it. 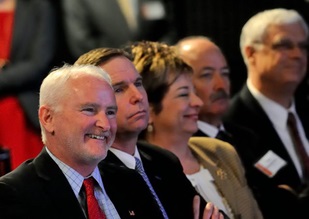 Other partners in the group that will make use of the study to raise awareness include (in alphabetical order) the Aircraft Electronics Association, Helicopter Association International, National Air Transportation Association, and the National Association of State Aviation Officials.

The study is not the first to find many benefits—expected and otherwise—from GA, though its scope is national and the story is easily understood.

“NATA, as the voice of aviation business, is pleased to participate in this effort to quantify the impact of our industry on the economy,” said NATA President Thomas L. Hendricks. “Studies like these are invaluable to our efforts to demonstrate to policymakers at the local, state, and federal levels the impact of general aviation to communities. Our membership uses these tools nationwide to support initiatives that grow jobs and commerce.” 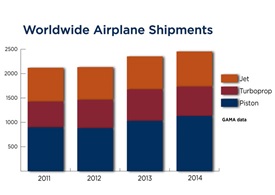 The General Aviation Manufacturers Association released its 2014 shipment and billing data Feb. 11, detailing a mixed bag of encouraging growth and troubling stagnation or decline. Airplane sales climbed, except for turboprops, while helicopters, both piston and turbine, saw setbacks. Analysts joined the conversation with their views on the data in the books, and a look at what’s ahead.