Get the app Get the app
News & Media Aircraft market mixed 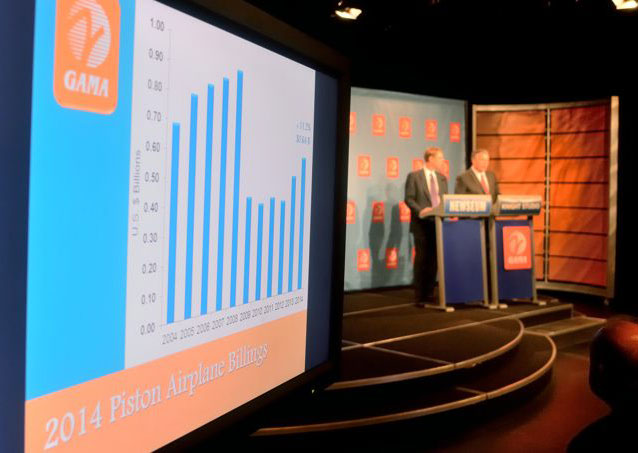 A 9.6-percent increase in piston airplane shipments was among the positives for 2014, and business jet sales also continued to climb, posting a 6.5-percent increase in 2014 shipments. Data released Feb. 11 by the General Aviation Manufacturers Association also included more troubling signs that the long-awaited recovery to pre-2008 production and sales levels is still in the future.

Aviation analyst Richard Aboulafia of the Teal Group said the mix of numbers fit well with other recent data, and collectively they amount to “encouraging” indications of progress with “a few areas of concern” mixed in. Aircraft demand and production are closely tied to other sectors of the economy, and there is a mixed bag there, too.

“The macroeconomic signs are very strong as long as you just focus on North America and ignore the rest of the world,” Aboulafia said, adding the industry is “happily flying along at altitude on one engine, and the engine is North America.”

GAMA President and CEO Pete Bunce sounded a now-familiar refrain, celebrating gains but noting that there were also losses that highlight the need for continued collaboration with government leaders and policymakers.

“The 2014 year-end numbers make crystal clear the need for GAMA’s priorities in 2015—specifically, reform that facilitates the introduction of new safety-enhancing products to market, reduces the inconsistent application of regulations, and strengthens the global engagement and cooperation among aviation authorities,” Bunce said. “We will continue to press forward on these issues, especially as the FAA reauthorization moves forward this year in the U.S. Congress and major general aviation regulatory change takes shape in Europe.”

After losing its place as the leading general aviation airplane maker to Gulfstream Aerospace Corp. in 2013, Bombardier came back strong in 2014, according to the newly released GAMA data.

It may be the last piece of good news the company hears for a while, thanks to recent struggles with the CSeries commercial jet program that prompted the company to put the Learjet 85 program on hold in January, writing off $1.4 billion and laying off 1,000 workers in the process.

Strong sales of the Global 5000/6000 series aircraft (80 airplanes) and Challenger series jets boosted Bombardier’s billing by $1.2 billion in 2014, a 19.44-percent jump that placed the Canadian firm within shouting distance of Gulfstream’s $7.78 billion in annual billing.

Aboulafia said this may be the last time Bombardier (which sold 204 aircraft for $7.56 billion) gets so close to Gulfstream, as the two firms are headed in opposite directions. Gulfstream has a robust development program with new models in the offing, and Bombardier’s ultra-long-range Global 7000/8000 series have been delayed.

“They’re hitting back in the segment they need to hit back in,” Aboulafia said, though he doubts Bombardier will reclaim its overall business jet market lead any time soon. “Bombardier didn’t get back to number one. Thank you, CSeries,” Aboulafia quipped. 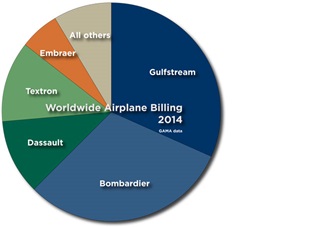 Bombardier and Gulfstream together account for nearly two-thirds of the global general aviation airplane market, each logging more than twice Textron Aviation’s $2.9 billion in 2014 billing, a figure that includes the Cessna and Beechcraft brands. Cessna bounced back from a difficult 2013 with a nearly 21-percent increase in total billing and 5-percent increase in aircraft shipped, though that was offset—from Textron’s perspective—by Beechcraft losses: a 5-percent drop in aircraft shipments and 11.5-percent decline in billing for 2014. Beechcraft accounts for only a third of the combined Cessna-Beechcraft total, however.

Aviation analyst Brian Foley of Brian Foley Associates said the 6.5-percent drop in 2014 turboprop shipments reported by GAMA probably has a lot to do with the 2012 bankruptcy of the former Hawker Beechcraft, and the firm’s subsequent purchase by Textron that got production moving again.

“All of sudden there was a big slug of deliveries that went through in 2013 because they didn’t happen in 2012, and that artificially inflated the true number of deliveries in 2013,” Foley said. “If we were to smooth that out, we would have seen small positive growth in that sector.”

Foley said the decline in helicopter shipments was more troubling.

Aboulafia said Cessna’s strong year reflects the strength of the North American market relative to the rest of the world, and a Cessna strategy that has focused on that market in recent years.

“Cessna very much reflects that North American (growth) dynamic,” Aboulafia said. “That’s a company that has not globalized to the extent of Bombardier or Gulfstream.”

Curiously, overseas airplane makers claimed a larger share of the piston airplane market in 2014, continuing a two-year trend during which U.S. factories have slipped from producing about 80 percent of the world piston airplane total to 70 percent. Aboulafia said that has “more to do with market fluctuations” and it is too soon to call it a trend, though the number bears watching in coming years. 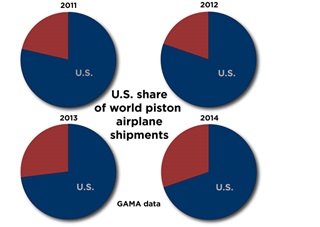 Foley agreed that a strengthening U.S. economy bodes well for many segments of the industry, particularly the small- and mid-sized business jets that were devastated by the 2008 economic collapse, and are now posting double-digit gains. Foley expects pistons will continue an upward trend as well, with double-digit growth in 2015.

Aerospace analysts at J.P. Morgan noted many of the same market fundamentals in the firm's forecast, expecting Textron’s growth to be driven by the Citation Latitude, while Gulfstream’s G650 will dominate the softening large-cabin market. The used jet inventory declined slightly in 2014, representing 7.8 percent of the fleet for models still in production, and 5.2 percent of the more competitive market for aircraft five years old or newer, the lowest level since 2008. Jet prices slipped slightly, while U.S. aircraft operations increased, up 3.2 percent year-over-year in November. European aircraft operations decreased 0.6 percent for 2014 despite a slight uptick in December, J.P. Morgan noted.

Airplane makers outside of the top five firms (which account for 92 percent of world aircraft revenue) posted mixed results in 2014, though many positive trends continued. Diamond Aircraft posted the largest percentage gains in both aircraft delivered and billing, up 45 percent and 65 percent, respectively (though Diamond’s billing represents a small slice—0.36 percent—of the total airplane market). Daher-Socata posted the second largest percentage gains, up 27.5 percent in airplane shipments (all of them TBM 900s) and 36 percent in revenue. 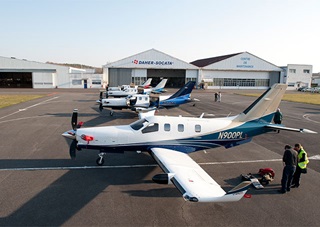 “2014 was one of the best years in the history of our TBM program, bolstered by the TBM 900’s launch and its generation of new sales,” said Daher-Socata President and CEO Stephane Mayer, in a news release that also noted 78 percent of the 2014 sales were made in North America.

Cirrus Aircraft also continued an upward trend, posting a 20.5-percent increase in billing that was nearly identical to Cessna’s, on a percentage basis, shipping 308 aircraft and billing $217.4 million in 2014.

Quest Aircraft also had a good year, increasing sales of the Kodiak single-engine turboprop (and Cessna Caravan competitor) to 30 aircraft from 28 in 2013, enough for a 17.6-percent increase in billing. Cessna, meanwhile, saw Caravan deliveries (including all models) slip from 105 aircraft in 2013 to 94, contributing to the overall decline in turboprop shipments.

“We continue to increase our production and deliveries of the Kodiak as the market rebounds and demand for a versatile aircraft like the Kodiak grows,” said Quest Aircraft CEO Sam Hill, in a news release. “We have experienced solid growth both geographically and in a range of market segments. Asia and North America were strong markets for us last year, and we are working to expand our market expansion there as well as other parts of the world in the coming year.” 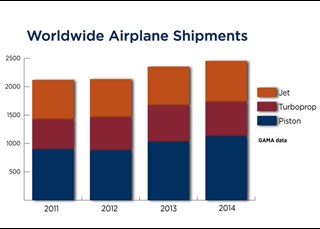 Demand for agricultural aircraft, which had long propped up the turboprop market, appeared to soften in 2014: Both Air Tractor and Thrush Aircraft posted declines in shipments and revenue. Piper Aircraft shipments and billing also slipped, by 8.5 percent and 9.6 percent, respectively. Piper’s $152 million in 2014 billing account for 0.62 percent of the world airplane total.

Dassault Falcon also slipped, though the December introduction of the Falcon 8X will give large-cabin buyers (who tend to favor the latest and greatest) a new option, and will likely help turn the fortunes in future years of the French company which posted a 14-percent decline in deliveries and a 22-percent decline in 2014 billing.

Brazil’s Embraer also has new models in the works, and is also expected to reap rewards from the Learjet 85 program’s suspension at Bombardier’s expense in the years to come, analysts said. Embraer, which had posted big gains in 2013 (including a nearly 30-percent increase in billing) slipped a bit in 2014, with declines of 2.5 percent in airplane shipments and 9.4 percent in billing, though the company remains on an upward trajectory that is expected to continue. 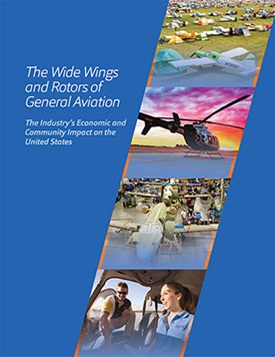 Did you know that general aviation supports 1.1 million U.S. jobs and contributes $219 billion to the nation’s economy? That’s among the facts and figures detailed in a new study announced Feb. 11. Learn more about the study, and how it will be put to use, in this related story.