Get the app Get the app
AOPA Members DO more LEARN more SAVE more - Get MORE out of being a pilot - CLICK HERE
News & Media Getting comfortable: Practice makes a pilot

Getting comfortable: Practice makes a pilot

Instructor Dan Farrell’s relentlessly positive attitude is nearly matched by his student, though Sherry Rosenkranz said getting comfortable in an airplane under the intense heat of the Florida sun may take longer than learning to fly.

“It’s snowing today in Michigan, at my house,” said the automotive advertising executive, with a touch of what might well have been wistful longing detectible in her voice. It certainly wasn’t snowing at Plant City Airport, where Rosenkranz landed in the late afternoon April 22 and taxied to the ramp after another successful lesson.

Besides the heat, there are power-on and power-off stalls to get used to, air work that makes her a bit apprehensive. The day “started off really well” Rosenkranz reported, noting that her previous trepidation about landing the Cessna 172 updated with a diesel engine by Redbird Flight Simulations has begun to ease. Rosenkranz and Farrell practiced touch-and-goes in the morning. In the afternoon, approaching Plant City Airport at the end of the day with camera crews waiting below, she leveled off several hundred feet above the runway and made another circuit around the pattern. She explained that her first approach was too fast, and she didn’t feel good about it, so she decided to break it off.

“And do what?” Farrell asked, coaxing the term “go around” from his student.

Rosenkranz, Chris Graves, and Nik Oekerman are all spending the week with flight instructors, Redbird simulators, RedHawk aircraft, and a rotating cast of celebrity flight instructors as part of the One Week Ready to Solo project. Graves spent a considerable amount of time flying with airshow legend and Red Bull Air Race pilot Mike Goulian on April 22; Sean D. Tucker flew with Oekerman the day before. One Week Ready to Solo, the brainchild of Redbird Flight Simulations with support from companies and organizations (including AOPA) across the general aviation spectrum, aims to demonstrate to the world that the right teaching and technology can put a pilot’s wings more easily within reach than many outsiders believe. The three students are all aiming to be ready to solo by April 25. 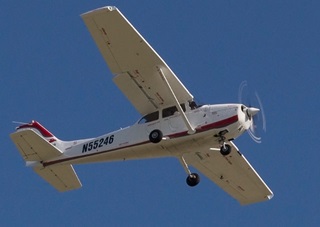 Rosenkranz said stalls are the next challenge.

“I’m a little apprehensive,” she said, but quickly followed that with resolve: It’s just a matter of repetition. Overall, “I think it’s coming together very well.”

Count on three-time U.S. National Aerobatic Champion Patty Wagstaff to help with that stall apprehension on April 23: Rosenkranz is booked for an early-morning flight with Wagstaff, and “I’m super excited,” she said. She know’s much of Wagstaff’s impressive biography already, and looks forward to flying with the airshow legend. But she quickly added that Wagstaff will have “some big shoes to fill,” as Farrell has done a superb job coaching her during the week.

Farrell, smiling as always, looked down at his shoes, noting they were, in fact, rather large—physically speaking.

Learning to fly, he added, is really just a matter of practice, practice, and some more practice.