Get the app Get the app
AOPA will be closing at 1:45pm ET on Tuesday, December 6th. We will reopen Wednesday morning at 8:30am ET.
AOPA Members DO more LEARN more SAVE more - Get MORE out of being a pilot - CLICK HERE
News & Media Colorado VFW holiday food, toy drive 'gratifying' 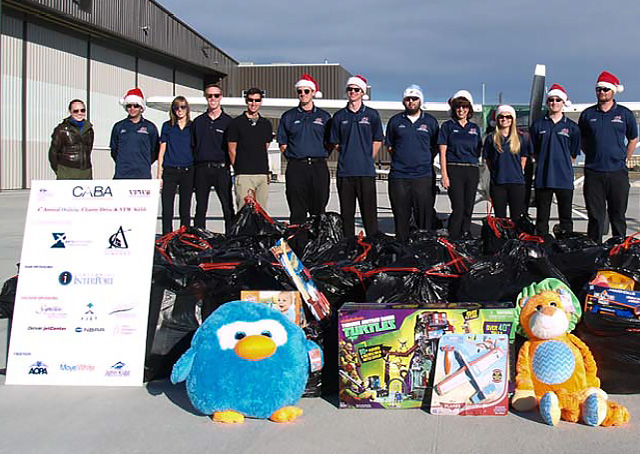 Colorado pilots donated their aircraft and their resources to make the holiday a little brighter for some of the state’s 18,000 Veterans of Foreign Wars members during the Colorado Aviation Business Association’s fifth annual holiday charity drive and airlift.

Twelve aircraft loaded with food and toys participated in the yearly event Dec. 6 and delivered more than 2,500 pounds of goods to Colorado Veterans of Foreign Wars members along the western slope, in Alamosa and Pueblo in southern Colorado, and in Las Animas and Burlington on the eastern plains.

Eight Cessna 172s, one Cessna 182, a Cirrus SR22, and a Piper Archer were dispatched to Montrose, Alamosa, Pueblo, Los Alamos, and Burlington. One aircraft loaded with 500 pounds of goods was unable to make the trip when a faulty gear door lock triggered a return to the airport for the Cessna Conquest pilot.

Colorado Aviation Business Association Chairman Mike Straka said weather was not a factor for the airlift when the charity flights began and it held in the mountain passes as pilots delivered supplies. Pilots kept a vigilant watch on the skies because early snowfalls have already blanketed the mountains and their passes with up to two feet of Colorado powder. Clouds built up around noon, he said, after most of the pilots had reached their destinations. All of the pilots were safely home at their bases by 5 p.m.

Another ton of food and holiday gifts will be delivered over land routes, Straka told AOPA. “This year we also got substantially more in the way of toys and cash. With the money we collected, we will likely purchase additional food and take it to different locations. Our tentative plan is to drive north up to Fort Collins and south to Fort Carson where about two dozen families are in need of food.”

Signature Flight Support at Centennial Airport provided a hangar to sort all the food, canned goods, non-perishables, and toys. “We used sort of an assembly line operation at the hangar where pilots grabbed bags and then pulled cans from one area, dry goods from another, and toys from another, before filling each bag with about 20 pounds of goods,” said Straka. “The thing about toys is they don’t weigh as much as canned goods. But the volume and space they take up can become an issue. There was a kitchen set for a young girl and it weighed about 30 pounds. You know, the weight and balance thing is critical for pilots.”

Although the charity drive is all about helping veterans who have fallen on hard times, participating pilots bring a little flair into the delivery process, too. “They’ll tighten it up, do a pass over the airfield and break for a landing,” said Straka. “VFW members, community members, and other pilots were there on the ramps to greet them when the volunteers landed.”

Straka said the holiday drive and airlift has delivered 15,000 pounds of goods over the course of five years.

“I’m a veteran myself, so it’s part of my motivation for the project. It’s extremely gratifying to me to be able to help fellow veterans experiencing a hard time, particularly during the holiday season.”