Get the app Get the app
AOPA will be closed July 4th, in observance of the Independence Day holiday. We will reopen at 8:30 am ET on Tuesday, July 5.
News & Media Epic E1000 takes flight 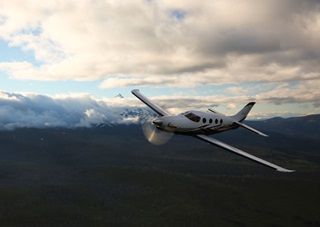 A Dec. 19 flight by the carbon fiber, six-seat Epic E1000 turboprop lasted 20 minutes with no surprises, and marked a milestone toward entry into the market as a factory-built alternative to the Epic LT kitplane.

“Traditional metal aircraft are at a tremendous disadvantage. Carbon fiber is lighter, stronger, more aerodynamic and less expensive to manufacture, providing more speed, range, payload, and performance at a highly competitive price,” Epic CEO Doug King said in a Dec. 23 news release. “That’s why the E1000 will be the fastest, most versatile and affordable, six-place single-engine turboprop in the world.”

Epic Aircraft is a privately owned company created to certify the sleek kitplane and is led by Doug King, a former builder who is among those who worked to rescue the company from a 2009 bankruptcy. Fresh investment in 2012 restarted the effort to build a factory version. Two years later, the company announced plans to hire workers to staff the 200,000-square-foot factory previously owned by Lancair.

The company hopes to begin deliveries in 2016, and will build a second prototype in the spring. The flight test plan will proceed to assess handling qualities, performance, system operations in normal and failure modes, extreme conditions, and flight into known icing (FIKI). The second prototype, built to match the production versions to come, will focus on assessing the interior and cabin functions, including fuel, hydraulic, and avionics systems, as well as navigation and environmental controls.

The company noted in the Dec. 23 release that more than 200 full-time staff are now employed in the Bend facility.