Get the app Get the app
AOPA will be closed July 4th, in observance of the Independence Day holiday. We will reopen at 8:30 am ET on Tuesday, July 5.
News & Media Aviation showcased at annual Kansas gathering 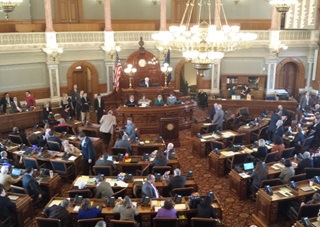 Many states organize official events or issue gubernatorial proclamations to recognize the contribution aviation makes to their communities and economy. But when the state that claims the reputation as the “air capital of the world” rolls out its aviation red carpet, you can count on a major turnout of dignitaries, policymakers, industry leaders, and other members of the aviation family.

Yasmina Platt, AOPA’s Central-Southwest regional manager, was in Topeka, Kansas, on Feb. 3 to attend Kansas Aviation Day, an event organized by the Kansas Department of Transportation and the Kansas Commission on Aerospace Education. It was held at the state Capitol building.

The day’s activities are designed “to showcase the impact the aviation industry has in Kansas,” said state Aviation Director Jesse Romo, adding that the session was “set up for networking, to give stakeholders and legislators the chance to meet and discuss the contributions aviation businesses make to the Kansas economy.”

Those contributions add up to an economic impact of $10.4 billion annually, Platt said. Kansas has more than 48,000 jobs, and an annual payroll of $2.3 billion linked to aviation. There are 7,000 pilots residing in Kansas, with 3,800 aircraft in the state.

Agriculture, another major Kansas industry, relies on aviation to defend crops worth $1.2 billion against disease and destruction.

The city of Wichita claims for Kansas its reputation as the air capital of the world.

“More aircraft have been manufactured in Wichita than any other city in the world,” said Platt. “Kansas aerospace manufacturing is the largest industry in Kansas. Three of the top five largest employers in Kansas are in the aviation industry, and the state is home to key aviation companies, including Cessna and Beechcraft (both Textron companies), Bombardier Learjet, and Spirit AeroSystems.”

Platt also met with Rep. Tom Moxley (R-District 68), a rancher and owner of an airstrip and a Cessna Turbo 182 single-engine airplane.

The evening preceding Aviation Day, Platt met and reviewed recent aviation-related legislative accomplishments with lawmakers and AOPA members Reps. John Carmichael (D-District 92), a pilot and attorney; and Joe Seiwert (R-District 101), a farmer and owner of an airstrip and a Piper PA-28 Cherokee. The group reviewed passage of a tax exemption for aircraft homebuilders in 2014, and the inclusion in 2011 of noncommercial aviation in a state law providing land owners with liability protection for the recreational use of private property.

Dan Namowitz has been writing for AOPA in a variety of capacities since 1991. He has been a flight instructor since 1990 and is a 35-year AOPA member.
Go to Dan Namowitz's Profile
Topics: Aviation Industry, Advocacy, Economic Impact