“Here they come, the Breitling Jet Team,” the announcer proclaimed through loud speakers.

As the seven L-39s came into view, spectators pointed and alerted those nearby to the most anticipated arrival of the day at AOPA’s Homecoming Fly-In in Frederick, Maryland, June 6. Off the north end of the airport, the pilots simultaneously initiated their jets’ smoke trails and overflew the airport, transitioning into their Avenger formation, similar to a diamond, for multiple passes. 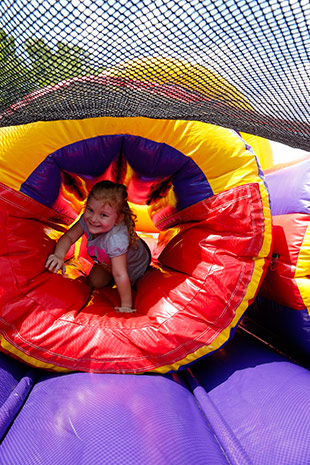 “Oh, that’s a good one,” an attendee exclaimed on the team’s fifth pass. The team’s graceful maneuvering culminated with a timed overhead break as each entered the right downwind for Runway 5. The civilian team taxied right up to spectators to line up and shut down with the same precision as the U.S. Air Force Thunderbirds or Navy Blue Angels while aerobatic star Michael Goulian lifted off for an aerobatic demonstration.

Goulian, who began performing in airshows in 1989 when he was a teenager, just returned from a fourth place finish in the Rovinj, Croatia, Red Bull Air Race May 30 and 31, to wow spectators with his precise aerobatics. The renowned aerobatic star flew past the crowd a couple hundred feet above the runway, rolling to triumphal music.

A steady breeze and partly sunny skies brought welcomed relief to attendees from the Mid-Atlantic region who had been deluged with a week’s worth of rain. More than 3,300 people attended, with 375 aircraft flying in throughout the event. Children danced in the flight display area while the Flying Musicians Association band performed Jimmy Buffett’s Margaritaville; parents, meanwhile, eyed dozens aircraft on display ranging from the experimental Bearhawk to Textron’s Cessna and Beechcraft lines.

While children of all ages had fun “playing” in the aircraft display area and watching the aerial demonstrations, a dedicated children’s area that included inflatable bounce houses, face painting, and cornhole offered an extra treat for the youngsters who came out to the airport. Many families even brought their four-legged friends for the day.

As Robert Stangarone admired a red Waco on display, he remarked that, “Anyone who’s a creature of aviation finds these types of events extremely valuable in staying up to speed on developments.” He cited an educational seminar that he had attended by NTSB Chairman Chris Hart, who is also a pilot, as an example.

Jim Gellios understands that value. Gellios, who drove from Alexandria, Virginia, for the Barnstormers Party Friday night and stayed for the fly-in on Saturday, regularly attends fly-ins and safety events. The events have helped him fly safely for more than 50 years, an achievement for which he was recognized in 2013 with the FAA’s Wright Brothers Master Pilot Award. The 84-year-old private pilot said he learns “a little bit every time” he attends a seminar.

Sharing learning experiences to increase others’ safety motivated FAA Deputy Administrator Michael Whitaker to talk about a hard landing he had returning from a long cross-country on Memorial Day weekend. During AOPA President Mark Baker’s Pilot Town Hall, Whitaker told attendees that at the end of a flight returning to the D.C. area from New Hampshire, he faced stronger crosswinds than he had ever experienced during his training. Whitaker said he performed a go-around after his first landing attempt because he was floating and set up better on the next approach. However, he porpoised on the second landing.

“They said it’s a license to learn,” said Whitaker, who earned his pilot certificate in October last year. “Nothing truer has ever been said.” 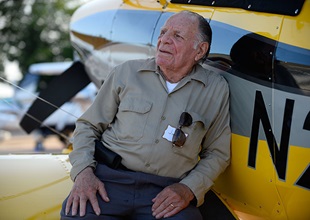 The damage was extensive enough that he said he got introduced to the FAA’s Baltimore Flight Standards District Office and later to “some of Chairman Hart’s folks” at the NTSB. “I’m getting to see the system from a wide angle,” he said. Whitaker said he has put his instrument training on hold to focus on takeoffs and landings in gusty crosswind conditions and will soon be flying with his “new friends” at the FSDO.

Pilots gave Whitaker resounding applause for sharing his story and the lessons he has learned.

“We’ve all made them,” Baker said, referring to mistakes everyone from new pilots to high-time professional pilots have made. “When you make a mistake, share it. ... I encourage all of you to do what he just did.”

Two of AOPA’s key goals are to build the pilot population and lower the cost of aviation. The association’s Reimagined 150/152 project to restore Cessna 150/152 aircraft is an effort to do both by encouraging people to learn to fly in these refurbished lower-cost aircraft that could rent for about $65 an hour. AOPA’s Reimagined 150 was on display in front of the headquarters building with information about the aircraft and learning to fly. Thirty-hour student pilot Rick Mihalinac spotted the bright yellow-and-black aircraft and talked his wife, Darcy, into hopping inside with him to try it on for size. 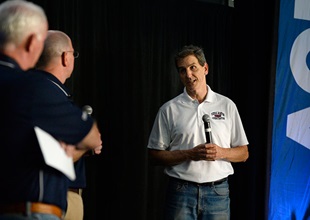 The Mihalinacs closed the doors, wiggled around inside to test out the space, opened the windows, and got a feel for the aircraft. It’s not as spacious as sitting in the back seat of a Piper Warrior PA 28-161, Darcy said, comparing the Cessna 150 to her experience riding along on one of her husband’s flight lessons at Arnold Palmer Regional Airport in Latrobe, Pennsylvania. But, for Mihalinac, the Cessna 150 is the “ideal airplane for us for the fun of flight.” He already has his eye on one that’s advertised in Trade-A-Plane.

“I used to fly with my dad back in the '70s,” he said of going up with his father in Cessna 150s and 172s. His father died about 15 years ago, and Mihalinac said he “missed flying with him.”

“That’s why he has a love affair with them,” Darcy said of the Cessna 150s.

Mihalinac and his wife attended a fly-in in Lock Haven, Pennsylvania, and went for a flight that reignited his passion for aviation and prompted him to start flying lessons. His goal is to earn his private pilot certificate later this summer.

“Once I get my license, she’ll be my flying buddy,” he said of Darcy.

While his wife might be his flying buddy, Mihalinac already has a community of supportive aviators that comprise AOPA. Stangarone said the camaraderie of being with other pilots, “particularly AOPA members,” is one of the highlights of the AOPA Fly-Ins.

Last year, AOPA reached more than 16,000 members where they fly, and we look forward to seeing more of you this year as the regional fly-ins continue. AOPA will be heading to Minneapolis on Aug. 22; Colorado Springs, Colorado, on Sept. 26; and Tullahoma, Tennessee, on Oct. 10.

Marty Miesko and his 11-year-old daughter Marina played a game in the Kids Zone after the pair flew to their very first AOPA Homecoming in the family’s Piper Comanche. The Mieskos split piloting responsibilities from their home base in Wilkes-Barre, Pennsylvania. Dad worked the flight controls and navigated while daughter dialed in radio frequencies, squawk codes, and VORs. “Dad says I can begin flight lessons when I turn 12, and that’s next month!” she said.

Mark LeRoy of Manassas, Virginia, was admiring a sporty yellow Great Lakes biplane next to the red Waco. “I would love one of those old warbirds,” LeRoy said. The private pilot earned his certificate in 2002 and flies a vintage Cessna 182A for the Pilots for Christ organization, which helps transport ambulatory patients.

The action moved from the ramp to the main tent for Friday evening’s Barnstormers Party where guests gobbled down huge helpings of chicken and pulled pork with traditional sides while they got to know their pilot neighbors.

A private screening of Brian J. Terwilliger’s new film, Living in the Age of Airplanes, drew a crowd of more than 800 and included a special Q-and-A session with the filmmaker. “On One Six Right, I gave it everything I had,” Terwilliger said. “For Living in the Age of Airplanes, I wanted to present a way to communicate that love for aviation to nonpilots.”

Terwilliger visited seven continents and many exotic locations and countries to capture just the right look. Narrator and pilot Harrison Ford sums up the movie’s message when he says in the film, “The airplane is the closest thing we’ve ever had to a time machine. We see more in a single glance than most people did in a lifetime.”