Seeking reasonable access to public airports and transparency of pricing

With the filing of official complaints to the FAA, AOPA rolled out the next phase of its ongoing effort to tackle egregious fees charged by certain fixed-base operations around the country. The move comes after months of effort identifying the worst offenders and attempting to work with local airport sponsors receptive to ensuring their communities offer pilots reasonable access to their airfields, often described as the local on and off ramps to the National Airspace System. 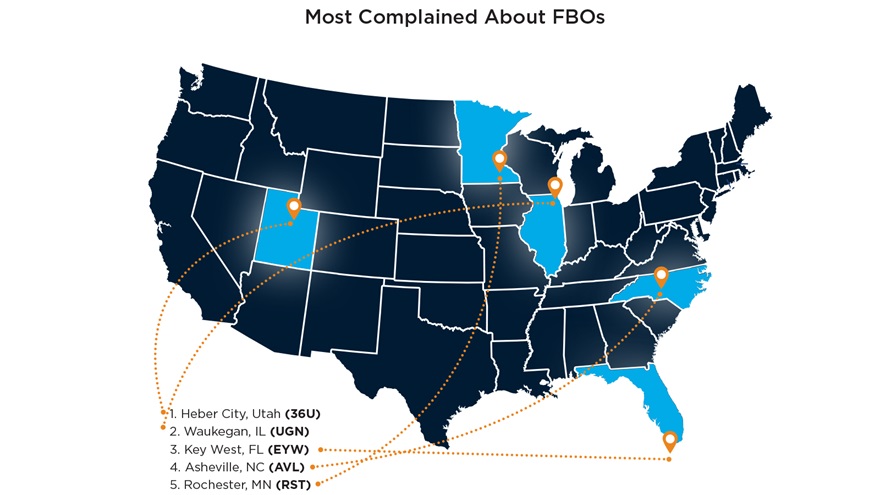 On Aug. 28, AOPA, along with seven affected pilots, filed FAA Part 13 complaints over egregious FBO pricing practices at Illinois's Waukegan National Airport, North Carolina's Asheville Regional Airport, and Florida's Key West International Airport, on behalf of its membership. At each of these airports, a single FBO controls all transient ramp space and fuel services, which means each FBO possesses a monopoly position and significant power over access to a public airport. AOPA believes each FBO has failed to fulfill its responsibility to protect the airport for public use through reasonable and fair pricing. The FBOs have instead engaged in egregious pricing practices under minimal oversight and in violation of standards designed to protect reasonable access to public ramp space.

The FAA Part 13 complaint process is a means for AOPA and impacted pilots, who also signed the complaints, to ask the FAA to investigate these practices and take any necessary action to ensure compliance with the airport’s grant assurances.

The FAA has the responsibility and authority to ensure that airports are complying with grant obligations that the airports agreed to when they accepted federal funding through the Airport Improvement Program. Obligations include requiring their FBOs to charge reasonable and nondiscriminatory pricing for each aeronautical service rendered. This requirement is necessary to protect the airport for public use. Otherwise, permitting exorbitant FBO prices would restrict or deter access, and disrupt the entire national system of publicly funded airports the FAA oversees and has sought to create.

Of the hundreds of complaints AOPA has received over egregious FBO pricing, Waukegan, Asheville, and Key West are three of the top five most-complained-about airports. All three are Signature Flight Support locations. The other two airports rounding out the top five are Heber City, Utah, and Rochester, Minnesota.

One pilot who considered flying into Waukegan wrote to AOPA about his frustration: “The stop-over was planned to allow my passengers to use the restroom and switch seats. I had no intention or need to buy fuel. The $55 handling fee could be waived with a 10-gallon fuel purchase, but I had no need for fuel and was not willing to pay their fuel price [at $6.50 per gallon] either.” The pilot avoided the airport.

Another pilot wrote about his experience at Waukegan after parking his airplane for two hours. He returned to find a $236 charge for his 4,400-pound aircraft. After he protested, Signature brought the final price down to $90.

These continued reports of exorbitant fees kept one pilot from traveling to Asheville after he read an online complaint from another pilot out for a weekend getaway who, “upon departure, was charged $400 in fees (handling fee, security fee, two overnight ramp charges and GPU [ground power unit]).”

While many FBOs do a great job of charging reasonable and fair prices for their services and protecting access, there are a growing number of airports where this is not the case. AOPA believes the pricing practices at Key West, Waukegan, and Asheville have become symptomatic of a broader trend at a significant number of public-use airports across the country: The transient ramp space, a critical public airfield asset, has been transferred to a single private FBO. When this ramp is under the exclusive control of the FBO, and is the only option for pilot parking, it becomes equally as valuable for access to the airport as the runways. And this presents an opportunity for the FBO, through its pricing, to prevent or restrict reasonable public access to the airport and its surrounding community.

“The FAA really hasn’t exercised proper oversight in this area for a very long time," said AOPA General Counsel Ken Mead. "These kinds of pricing practices have put airports in violation of grant assurances and at risk of losing federal funding. It’s the responsibility of the FAA and airport sponsors to ensure the terms incorporated in each lease are upheld, especially when they are accepting federal grants.”

Each of the Part 13 complaints alleges that Signature’s pricing practices are unreasonable for requiring transient operators, by virtue of landing at the airport, to pay minimum FBO fees for certain facilities and services from which they do not benefit or use. AOPA also alleges that the airports lack competitive or regulatory forces to ensure the reasonableness of Signature’s pricing.

The Part 13 complaints point out the importance of the airport sponsor’s responsibility to “protect general aviation’s ability to access local communities and, conversely, local access to the national transportation system,” and how vital oversight is necessary to protect against unreasonable and discriminatory pricing.

“Our members have spoken and they’re tired of being forced to pay for services they don’t want, ask for, or need,” said AOPA President and CEO Mark Baker. “It’s all about price transparency and reasonable access to places that are supposed to be public. We also believe that promoting more competition will help relieve some of the ongoing problems our members continually face at these locations."

Egregious pricing practices deter and restrict airport access and severely affect all aspects of general aviation from flight training to recreation. Unreasonable pricing practices also can have grave effects on surrounding communities. By pricing out certain GA traffic, FBOs are harming local economies. Pilots and travelers who usually access these communities are scared away by the FBO’s sky-high prices. The money those travelers would normally spend never reaches cities and towns across America.

Fortunately, there are governing bodies willing to take steps to protect their communities against egregious pricing practices by their FBOs. One airport paving the way for other locations is John Wayne Airport in Orange County, California. Following continued reports of higher-than-average prices, the airport board moved to replace Signature. As a result of their lease termination, Signature filed an FAA Part 16 complaint, citing violations of grant assurances and unfair discrimination, which the FAA then denied. The FAA ruled that airport sponsors have a “right and responsibility” to consider FBO pricing. The decision set a precedent for community leaders and airport boards looking for guidance and encouragement to stand up for the rights of their customers, the public, and the GA community.