Get the app Get the app
Already a member? Please login below for an enhanced experience. Not a member? Join today
News & Media 'Kiwis' and collegiate pilots soar in Air Race Classic

The air racing team Kiwi Express was pronounced the winner of the 2017 Air Race Classic, the annual all-women’s aviation event that dates to 1929, and this year featured teams from 13 colleges and universities, several well-known aviation personalities, and a three-member team from AOPA consisting of “a new pilot, a rusty pilot, and a professional pilot.” 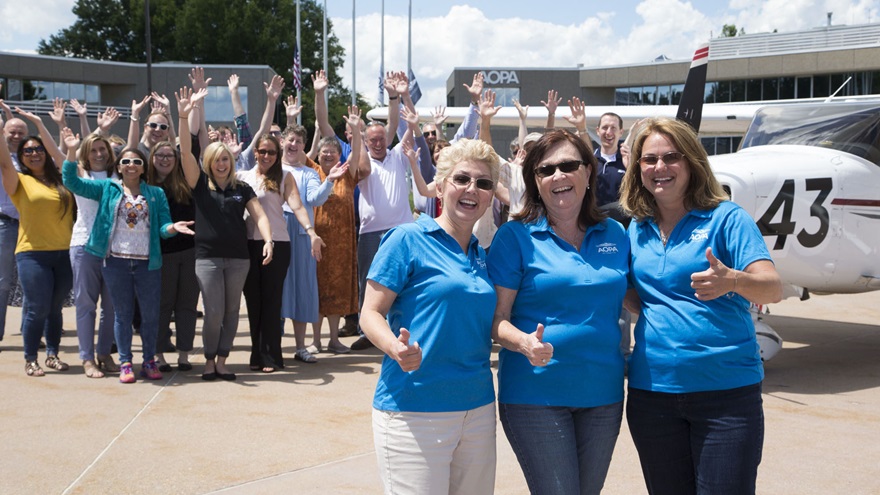 More than 100 individual competitors were entered in the forty-first annual race that launched from Maryland’s Frederick Municipal Airport on June 20, with completion of the north-then-westerly course to Santa Fe, New Mexico, required by a deadline of June 23 at 5 p.m.

Stops included Coshocton, Ohio; Indianapolis, Indiana; Decorah, Iowa; Bemidji, Minnesota; Spencer, Iowa; Abilene, Kansas; Ardmore, Oklahoma; and Plainview, Texas, with the teams performing a high-speed flyby across a timing line as they competed—not directly against each other, but against the clock. From Plainview, the racers flew to Edgewood, New Mexico, for a flyby of Sandia Airpark Estates East Airport, after which they could throttle back for their arrival in Santa Fe.

Their times were measured against a handicap flight flown before the race, with the team that most outpaced its handicap speed across all the legs of the race winning.

In a race within the race, the runner-up team, the Gurley Girls (Rachel Hutzell and Becca Dooling of Embry-Riddle Aeronautical University’s Prescott, Arizona, campus) were the top finishers among collegiate teams, flying their 2014 Cessna Skyhawk 172S Nav III to a score bettering their handicap by 2.110 mph.

Bemidji, Minnesota, the race’s northernmost stop, was the first day’s distance limit for many teams, but four teams flew as far as Spencer, Iowa.

That encouraging start did not guarantee continued good fortune, however, as the winds aloft “changed dramatically” for the pack leaders, hammering the speed-versus-handicap performance en route to Abilene.

Alicia Sikes, a four-time Air Race Classic contender and a major airline captain, was a member of one of those teams, “Over the Moon!,” flying with Nancy Rohr in a 1979 Mooney M20J. The June 21 leg to Abilene cost the team 30 mph versus their handicap on their way to a thirty-fourth place finish overall.

“Strategy doesn’t always pan out, but you always have a good time and you get to hang with fun people,” she said by phone.

Debby Rihn-Harvey, a national aerobatics champion and airshow performer now a year into her retirement as a senior captain at Southwest Airlines, also competed, flying as a member of the Houston Hot Flashes with SWA Captain Chris Dale, Rihn-Harvey’s stepdaughter.

Ariel Tweto, known to many from television’s Flying Wild Alaska, and whose flight training was partly televised on the show, flew the race with Mary Wunder to a seventeenth-place finish in Wunder’s 1975 Mooney M20F as the team “Popping Bubbles.” The team name spotlights an organization Tweto founded “to pop the social and physical barriers that prevent people from living happy and successful lives.”

Back in Frederick, waves and applause from an enthusiastic group of AOPA staffers provided a warm welcome home on June 27 for the AOPAngels, as professional pilot Luz Beattie, “rusty” pilot Kathy Dondzila, and new pilot Paula Wivell arrived in their 2001 Cessna Skylane 182T on AOPA’s ramp after their adventure, the spirit of which was captured in this blog Dondzila filed on the Air Race Classic’s award day.

According to the nonprofit Air Race Classic organization, the event “traces its roots to the 1929 Women's Air Derby, in which Amelia Earhart and 19 other daring female pilots raced from Santa Monica, California to Cleveland, Ohio. That contest, aka the Powder Puff Derby, marked the beginning of women's air racing in the United States.”