Get the app Get the app
AOPA Members DO more LEARN more SAVE more - Get MORE out of being a pilot - CLICK HERE
We will be performing maintenance on our systems Tuesday, 9/27, beginning at 12:00 A.M. ET and ending at 6:00 A.M. ET. During this time, you may experience intermittent service outages. We appreciate your patience.
News & Media Drones defend, entertain at the Super Bowl

Some trusted, some tethered, and some taken into custody

When 150 Intel drones flew inside Mercedes-Benz Stadium for a first-ever live Super Bowl halftime performance on Feb. 3, another team was perched on a rooftop flying security overwatch with a tethered quadcopter. Both operations reflected the state of the art in the ongoing mission to make unmanned aircraft trusted participants in major events. 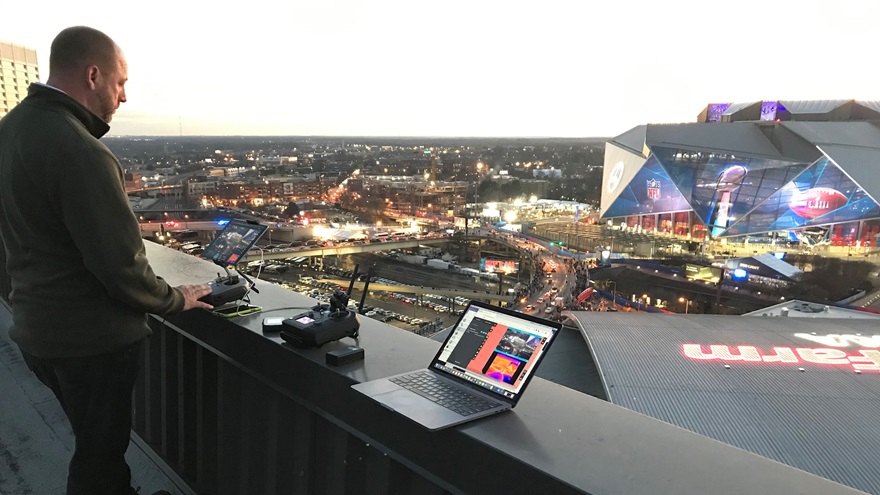 A tethered drone flown from a rooftop near Mercedes-Benz Stadium in Atlanta supported security efforts in the days leading up to, and during the, 2019 Super Bowl. Photo courtesy of Skyfire Consulting.

Days before Intel launched its Shooting Star drone formation to spell out “ONE” and “LOVE” during Maroon 5’s performance of She Will Be Loved, Skyfire Consulting co-founder Matt Sloane led a team of pilots to a rooftop near the stadium to set up overwatch with a tethered DJI quadcopter. It might not have been the most exciting kind of flying, but it was another validation that for all the trouble drones can cause (notably, disrupting operations at major airports in recent weeks), they’re also valuable tools to law enforcement and security agencies.

“We had to put together a pretty extensive safety plan to make sure we weren’t going to affect all of the low flying security aircraft,” Sloane said, reached by telephone as he kept watch over the rooftop operation on the day before the big game. That plan included use of a tether system made by Drone Aviation Corp. that powered a DJI Matrice 210 fitted with optical zoom and thermal imaging cameras, and ensured it would not stray too far from the rooftop and wind up flying over the throngs of people who took part in days of pregame festivities below. “We have a 200-foot-by-200-foot exclusion zone … we’re basically straight up and straight down.”

Skyfire’s video feeds were shared among the various agencies that converged on Atlanta to protect one of the biggest public events of the year, using a platform built by DroneSense to enhance situational awareness. Sloane said securing the required approvals to be one of three entities authorized to fly unmanned aircraft in the exclusion zone established by the FAA and enforced by the FBI, which announced on Jan. 31 the confiscation of six drones flown illegally, took more than a year of work. Relationships forged by supporting public safety organizations, the mainstay of Skyfire’s business model (and the subject of a 2018 feature in AOPA Pilot), helped Sloane earn the gig. His firm was hired by the Georgia World Congress Center Authority, which operates 13 of the 15 venues around Atlanta that hosted events related to the big game in the days leading up to the Feb. 3 main event. 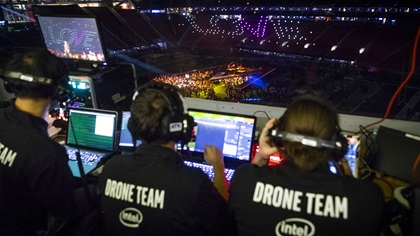 Providing law enforcement and security officials with an aerial perspective was the culmination of years of effort, and the realization of a vision, Sloane said: “Ultimately, that’s why we started this business to begin with.”

While Sloane and his team provided thermal and visual images to the public safety command centers, responding to requests to take a closer look at areas of interest and in constant two-way communication during shifts that began at noon and ended at midnight (a little later on game day), U.S. Army Black Hawk helicopters and U.S. Air Force F–16s patrolled the skies to enforce a temporary flight restriction that extended 30 miles from the stadium during the game.

A spokesman for Echodyne, developer of a compact radar system being tested as a potential detect-and-avoid solution for drones flown beyond visual line of sight, said in an email exchange that he couldn’t comment on reports that the FBI had hired the company to set up its Metamaterial Electronically Scanning Array systems around the stadium due to a nondisclosure agreement. First reported by The Guardian on Jan. 28, the Federal Communications Commission granted Echodye an emergency approval from the FCC to deploy the system in Atlanta.

It’s not clear if that system led FBI agents to the rogue drone operators whose equipment was confiscated in the days before the big game; the FBI was probably also using AeroScope, a DJI-made platform that detects radio communications to and from DJI-made drones that allows users to quickly locate both aircraft and ground control station, or another technology with that capability. The FBI displayed DJI drones at a Feb. 1 news conference, warning that the no-drone zone was being enforced, and violators could face stiff fines and potential jail time.

Also reported to be on patrol was a trio of drone-hunting drones operated by Fortem Technologies, six-rotor systems fitted with nets able to capture rogue drones in flight. There were no immediate reports that those drones had bagged any offenders. 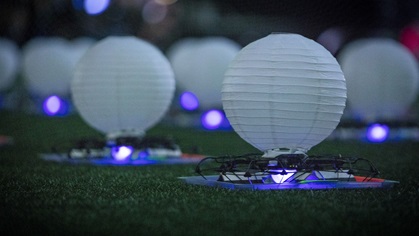 Inside the stadium, Intel relied on electronic restrictions that prevented the Shooting Star drones from leaving the confines of the stadium, the company noted in a news release. The light show was the company’s largest indoor display to date, and the first live performance during the Super Bowl.

“Our team constantly looks for opportunities to push the boundaries of innovation and deliver stunning entertainment experiences with our drone technology,” said Anil Nanduri, Intel vice president and general manager of the Intel Drone Group, in the news release. “When we received the opportunity to bring our drone light show technology back to the Super Bowl, we were excited by the challenge to execute it live and within a closed stadium environment. We collaborated with the show producers, both creatively and technically, to bring a special and unique show experience to the viewers. It was an honor to have performed with Maroon 5 to create a memorable experience for those watching live from their seats in the stadium and for viewers watching at home.” 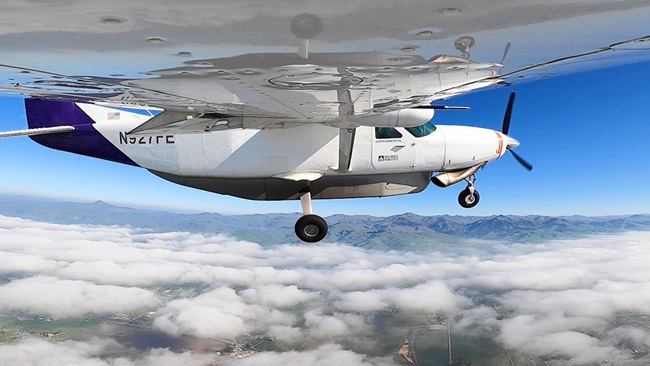