Get the app Get the app
Already a member? Please login below for an enhanced experience. Not a member? Join today
News & Videos One-G sim maximizes training environment

A Seattle aviation technology company hopes to help grow the pilot population by integrating flight simulators into a flight training curriculum with a pay-as-you-go philosophy and no up-front fees. 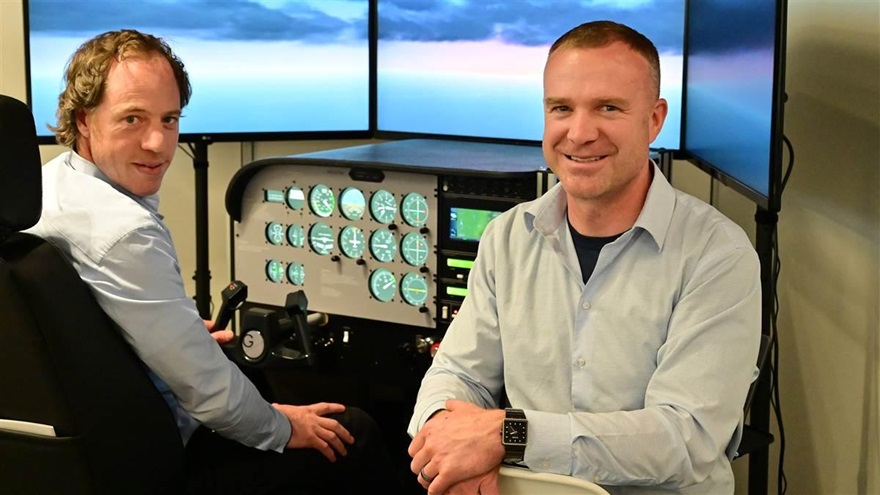 “One of the cool things is that it comes fully assembled,” said one-G Simulation founder and CEO Xylon Saltzman, who installed a Foundation Cessna 172 advanced aviation training device (AATD) at the AOPA You Can Fly Academy. “The beauty is that the customer pulls it right out of the crate, plugs it in, and is good to go,” said Saltzman, an instrument-rated multiengine commercial pilot, flight instructor, and former Part 135 charter pilot. He noted that flight schools can integrate an FAA certified flight simulator into their training regimen from the ground up, “with very low commitment,” and without a multi-thousand-dollar purchase price.

The company's business model calls for flight schools to begin using the simulator for the cost of shipping, which ranges from about $500 west of the Rockies to about $1,000 on the East Coast. Flight school customers then pay a $55-per-hour base rate while the machine is communicating with the firm’s headquarters during a training session.

The more hours a facility logs, the cheaper the AATD becomes, Saltzman explained. After 21 hours of usage the hourly rate drops to $49 and is discounted $3 per 10-hour block thereafter down to $41 per hour. “The more a school uses it the better it is for them. It’s truly a win-win situation.” He added that once a new pricing threshold is reached, all hours for that billing period are billed at the lower rate.

Saltzman said the concept helps a lot of smaller flight schools integrate a simulator into their training regimen, which lowers students’ costs while building their confidence and familiarity to better tackle an airplane cockpit with all the noise and multitasking that can come along with it.

“We can start to immerse flight students with tasks that they might not have considered performing in an aircraft. For example, I start students with radio usage on day one, so that by the time they’re in a Cessna 172, they are good to go” with the routine.

One-G’s program integrates PilotEdge radio training into the flight training scenario, which adds realism to radio work, he added. Retired air traffic controllers and other airspace specialists operate a virtual air traffic control tower and can actually “see the Foundation [simulator] on radar, along with other traffic in the area. It’s like real-time air traffic control. I swear I can’t tell the difference between the virtual ATC and the real thing, and it’s a lot of fun, too,” Saltzman added.

Dave Rider, the company’s vice president, helped install the main workstation and the three 27-inch HD video monitors that provide a lifelike flying environment. He said that simulator training is efficient because it enables students to progress regardless of the weather conditions outside and works as well for instrument currency as it does for primary VFR flight students. “It’s a great platform to lower costs” for both types of flying.

The Foundation Cessna 172 simulator's flight panel has standard steam-gauge instruments and a Garmin GTN 650 touch-screen GPS emulator. The instructor operating station allows for nearly infinite scenarios, and approved students can operate their own simulator sessions. Sessions are stored in the cloud-based one-G simulation portal and provide an effective review and debriefing process.

One-G’s commitment to helping AOPA grow the pilot community led to the installation of the Foundation Cessna 172 simulator. Rider complimented the AOPA You Can Fly High School Initiative for increasing pilot and student access to “top notch” educational tools. At the close of 2018, more than 2,500 students at more than 100 classrooms were benefiting from the You Can Fly program’s aviation-based high school curriculum.

Rider said the training device would benefit pilots, instructors, and students by equipping them “with immediate access to the most modern learning tools and systems.”