Get the app Get the app
Get the latest news on coronavirus impacts on general aviation, including what AOPA is doing to protect GA, event cancellations, advice for pilots to protect themselves, and more. Read More
Already a member? Please login below for an enhanced experience. Not a member? Join today
News & Videos Rainbow Learjet brightens lives, skies

A Learjet 35A painted in rainbow colors was temporarily dubbed the “Dream Chaser 5” as it brightened the skies and cheered the hearts of seriously ill children during flights May 23 to 29 before the aircraft was retired. The business jet donated by International Jet Aviation was hard to miss during stops in Denver, Los Angeles, Salt Lake City, and other western U.S. cities as it saluted the Make-A-Wish Foundation—the philanthropic organization that brings joy to those facing extreme health hardships. Make-A-Wish says on its website that it grants a special wish about “every 34 minutes” in the United States and its territories.

The children chatted with pilots, sat in the cockpit, and boarded the colorful aircraft for flights over their homes during a six-city swing. After their flights, many of them signed their names on the 500-mph jet’s sleek fuselage.

International Jet Aviation founder William Milam III and CEO Lynn Krogh pledged in 1979 when they established their company with a Cessna 421B, that one day they’d “give some of it back, in some way, to the community.” Milam noted that the success of the Denver-based firm reminded them there was “an unpaid debt owed to our community and those around us.”

The company has participated in Make-A-Wish flights since 1990, and the idea for the colorful flight experience had been brewing for a long time, Krogh wrote in a news release. He called the humanitarian missions “rewarding,” and he complimented employees who “volunteered their own time to make this project possible.”

The previously white-and-blue speedster was registered in 1982, and it was retired from service after its commemorative missions were completed. 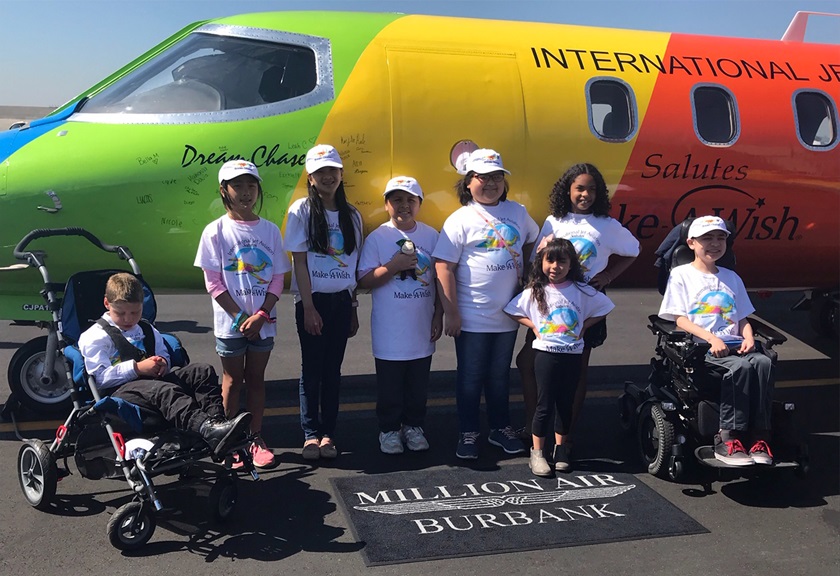