Get the app Get the app
AOPA Members DO more LEARN more SAVE more - Get MORE out of being a pilot - CLICK HERE
News & Media Bumpy rides, long flights don’t faze pandemic relief pilots

A line attendant waited with a cart and a masked crew sprang into action to offload the cargo when Bill Harrelson shut down his Lancair IV laden with 175 pounds of face shields packed in 15 boxes on an FBO ramp at New Jersey’s Newark Liberty International Airport on June 9 after a long day’s flight from Moriarty, New Mexico. 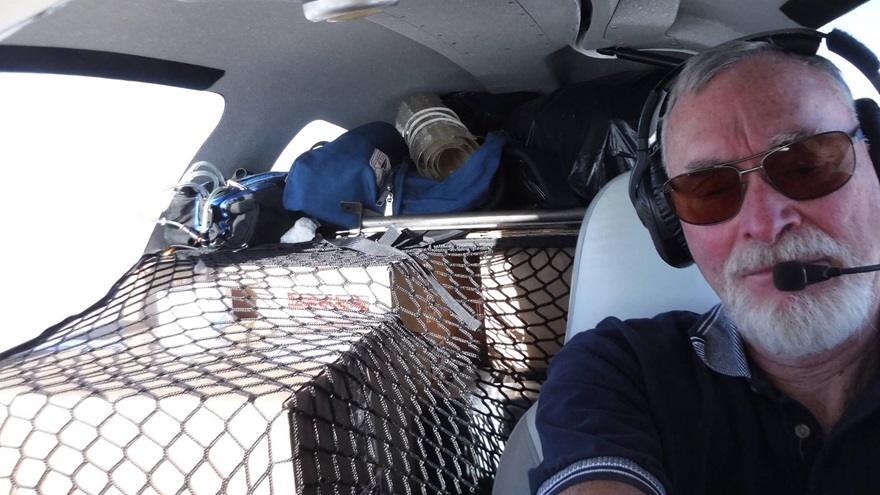 The delivery was one of several missions being coordinated simultaneously by Aerobridge, an organization that matches general aviation and business aviation resources with disaster-response situations to deliver medical supplies to hospitals in Georgia, Maryland, and New Jersey.

Harrelson’s journey was the second phase of an effort that had begun the previous day on the other side of the continent. CarolAnn Garratt of Moriarty had flown her Mooney M20J 201 single to San Jose, California, to pick up the face shields produced by members of the Maker Nexus organization of Sunnyvale, California, and return to Moriarty, circumnavigating high mountains on her westbound leg and plowing along in constant turbulence on her return flight—including two hours of “torturous bumps” requiring her to disengage the Mooney’s autopilot.

Making progress against a pandemic

When Don Landwirth, a board member of the Sunnyvale, California-based organization Maker Nexus delivered 6,000 face shields to volunteer pilots waiting to fly them to hospitals thousands of miles away to the east, it was just one example of how groups funded by donations and powered by volunteers are allying to confront huge challenges like the coronavirus pandemic.

Maker Nexus is a ”makerspace,” allowing members to use its tools to build “anything you can imagine,” and trains newcomers. The face shields sent east with pilots consisted of components laser-cut from clear plastic and headbands and stiffeners run off on 3D printers, said Landwirth, a “serial entrepreneur” with a background in manufacturing, IT infrastructure, and online marketing.

The organization’s website includes instructions for those who would like to help out during the pandemic by making face masks, face shields, and scrubs at home.

According to its website, Maker Nexus by mid-June had delivered almost 53,000 face shields with 575 volunteers producing 2,000 more a day at a cost of $4 each. Impressive numbers, Landwirth noted, but more so when you consider that Maker Nexus’s face shield production began with one individual trying out his skills in the quiet of a statewide shutdown that ended for the organization in mid-June—an experiment that has now “exploded into this huge effort,” he said.

Back on the ground in Moriarty the next day, she met up with Harrelson, who had flown out from Fredericksburg, Virginia, stopping just once in West Texas to refuel his 210-knot, 11-gph experimental Lancair IV—all according to a plan they had been waiting to activate for about a month.

After a tour of Moriarty, a good meal, and some sleep, Harrelson arose the next morning and headed east to Newark, his aircraft set up in a two-place configuration that provided plenty of storage space for the bulky boxes—and a 175-gallon fuel load.

Flying GA during a crisis

As the coronavirus pandemic wears on, GA pilot volunteers continue moving crucial supplies to where they are needed most, often by connecting with organizations like Maker Nexus, which is producing personal protective equipment for healthcare workers with donations funding the production, making the equipment available to medical end users at no cost.

For the volunteer pilots, taking a few lumps en route is sometimes part of the package, so it probably helped this cross-country mission go off as smoothly as it did, once the face shields were ready for shipment, that both Garratt and Harrelson are world speed-record holding, earthrounding pilots who own versatile aircraft and have a strong desire to bring their skills and resources to bear against the coronavirus pandemic. (Both are also airplane builders: Garratt built a Rans S–7S, and Harrelson built his Lancair.)

Harrelson, a retired airline pilot, said he learned through Aerobridge about a month ago of the opportunity to transport face shields that were being produced in California on 3D printers. Coast-to-coast flights being a bit much for most volunteer pilots and their aircraft, he pitched the idea of a team effort to his friend, Garratt, who before the pandemic had flown patients to medical destinations for another charitable organization, Angel Flight, and had rounded the world three times to call attention to another deadly illness, Lou Gehrig’s disease, also known as amyotrophic lateral sclerosis, or ALS.

Unable to fly patients in need during the crisis, Garratt “was happy to help with flying boxes,” she wrote in an email.

Despite the pandemic, the flights were straightforward, Garratt and Harrelson said, noting efficient coordination by air traffic control and FBO protocols mandating the wearing of face masks by staff and customers, and facility modifications that limited close contact between parties.

“There were signs on all the doors. Otherwise they were open for business. You just had to follow the rules,” Garratt said.

Garratt, who frequently flies gliders and recently moved to New Mexico to pursue her love of soaring, said she would have “no worries” about traveling by GA aircraft as circumstances permit during the coronavirus crisis.

Harrelson agreed, noting that the relief flights also provided a means of scratching the itch many pilots feel about doing something constructive in the battle against COVID-19.

Dan Namowitz has been writing for AOPA in a variety of capacities since 1991. He has been a flight instructor since 1990 and is a 35-year AOPA member.
Go to Dan Namowitz's Profile
Topics: Public Benefit Flying, People, COVID19