Get the app Get the app
News & Media ‘Here we go, smoke on now!’

“We’ll take off two by two, then we’ll join up in a diamond formation off Warbird Island,” AeroShell Aerobatic Team slot pilot Jimmy Fordham told me as he swung the North American T–6 Texan’s tail through S-curves on the taxiway at Wittman Regional Airport in Oshkosh, Wisconsin, during an EAA AirVenture ride-along.

“We’ll do a loop, a wingover, and a barrel roll. Those are the first three maneuvers we fly during the airshow, and you’ll get to see what that looks like from the diamond—which is probably the best seat in the house because you’ll be able to see the other aircraft really good,” he explained in a reassuring Southern drawl.

I was glad to have been offered a rear-seat ride as Fordham and teammates Steve Gustafson, Mark Henley, and Bryan Regan sharpened up with a morning practice flight ahead of the midweek night airshow in which this team has played a starring role for years.

I quizzed Fordham about his flying background, and vice versa, so we got to know each other a little better. His aviation career spans 53 years with more than 22,000 hours logged, beginning as a teenager and progressing through a 27-year airline career capped by senior captain status with Delta Air Lines.

We hit common ground with Delta, which began as an agricultural application company in the late 1920s in Monroe, Louisiana. I’m from Atlanta, which is Delta’s modern-day headquarters. “So, did you start with Delta in Monroe?” I kidded as we taxied the big warbird past Vintage Camping to waves of appreciation from attendees crowding the flight line as the red-and-white AeroShell taildraggers snaked toward the runup area. 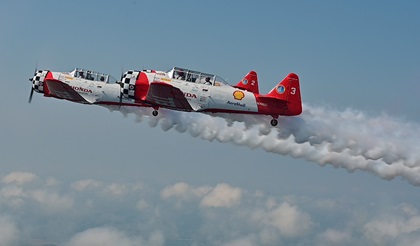 “Ha-ha, I’m just about that old!” he countered over the intercom. “You know the history and all that because you’re an Atlanta boy. But, naw, I started flying in high school. I was born and raised down in New Iberia, [Louisiana,] and my dad was a general aviation pilot and instructor. I took advantage of all that, went to college, majored in aviation, and began building time. I knew I wanted to fly for the airlines.”

Fellow Louisianan and International Aerobatic Club Hall of Fame member Marion Cole introduced Fordham to aerobatic flight, and he’s quick to thank Gustafson’s father, Merle, for some early mentorship. “You see Steve Gustafson, the guy in the number three plane right there—his dad encouraged me a whole bunch. It’s kind of neat—I’ve flown in formation with Steve’s dad, I’ve flown with Steve, and I’ve flown with his son,” too.

Though the 2020 Wright Brothers Master Pilot Award recipient modestly says he’s “nothing special as a pilot,” it’s clear he is dedicated to perfecting the complex aerial dance, especially for the popular night shows and the accompanying additional challenges of reduced visibility.

As we entered the runup area, Fordham went over the routine one more time, for my benefit.

“Three is my lead and I’ll keep him on my wing,” he rehearsed. “We’ll turn to a heading of 180 degrees, climb to about 4,000 feet, and join up in the diamond formation” as lead pilot Henley sets the group up for maneuvers. “We’ll do a loop followed immediately by a wingover to the right, and that turns us back around 180 degrees. Then we’ll do a barrel roll to the left. We’ll be diving in right there toward Runway 36 Left from the south going north. Mark [Henley] will call, ‘Here we go, smoke on now!’ When he gets ready to pull, he’ll say, ‘Ready, loop—pull now!’ As he starts to put Gs on the airplane, we’re going [with him]. As he goes vertical, he’ll call ‘Power!’ and he’s actually reducing his power to give me an advantage because I’m on the outside of the circle and I’ve got to fly faster than him.”

Henley will hold that configuration until he starts down on the back side of the loop. “Then you’ll hear him say, ‘Power coming in.’ He’ll put some Gs on the airplane and he’ll say, ‘Nose up, right turn!’ That’s setting us up for the wingover which will give us a 180-degree turnaround,” Fordham added. “Once he gets set up there, he’ll say, ‘Barrel roll coming up!’ The next thing he’ll say is ‘Nose up … and roll!’ That’ll start the barrel roll and we’ll complete that maneuver. Then he’ll call, ‘Smoke off, climbing for the bomb burst’ and we’ll be climbing out and ready to set up for the next maneuver.”

This would all take place at dusk with the four Texans stationed just a few feet apart, their LED lights blazing a trail through the darkening sky, while airshow smoke billows from the undercarriages. Fordham said the fading daylight presents unique challenges for the tight formation, but he assured me they are well-prepared. “The darker it gets—you know you can’t see as good—so you start moving closer. Well … you don’t want to do that! And we’re not talking about 30 or 40 feet, we’re talking about two or three feet. But we’ve done it so much we have a real good sense and feeling for what looks right.”

It’s simpler in daylight, and he was right—when we took off, I had the best view from the rear of the diamond formation. I was amazed at the tightness of the formation as the intercom crackled to life. “Smoke on, now,” urged Fordham, while sliding left and right so I could make some photos while the team warmed up. The Pratt & Whitney R-1340 radial engines were roaring. The scenery over Lake Winnebago and patches of adjacent farmland was spectacular, and I could sense the real show was about to begin. 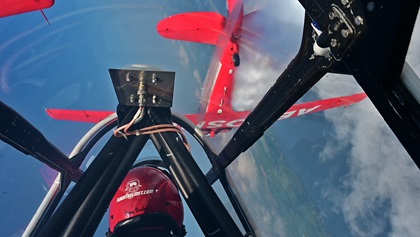 “OK, here we go, we’re going to have some fun, David,” Fordham advised. A triple stream of smoke framed us as I heard the “Smoke now!” command, followed almost immediately by the “Ready, loop—pull” command from Henley. I was amazed as the diamond formation climbed together high in an ascent. I couldn’t hold back shouts of exhilaration as gravitational forces pushed me back into my seat and I struggled to hold up a camera to document the maneuver. A later look at the cockpit-mounted video footage showed a grin so ecstatic and wide that you can almost count my fillings. “Yeah, sweet!” I exclaimed, as the sun filled the windscreen and clouds billowed in the distance on each side of the horizon. I recall hearing the “Power coming in” command before nose up quickly turned to nose down—and an olive lake replaced the blue sky I had just photographed.

I admired the unique view as we sliced through smoke funneling past the port and starboard sides. “That was the loop,” Fordham narrated, “now, the wingover to the right. Are you OK, David?”

“Yeah, looking good,” I marveled as we started into the next maneuver. It wasn’t a slamming sensation, but rather a graceful, long arc that gave me time to appreciate the dexterity and communication that goes into an airshow formation routine. “Wow, how pretty, it’s just beautiful,” I managed as the grin got wider and wider, punctuated by my hoots and hollers. “Nicely done!” I complimented as Fordham righted us and announced an end to the fun, all too soon.

“That’s it, buddy,” he said as chatter from arriving aircraft filled my headset and we began a three-mile final to the airport. After we rolled to a stop near airshow center, I thanked Fordham for the opportunity to appreciate and experience—for just a few minutes—the precision and skill he’s spent a lifetime perfecting.

The entire AeroShell Aerobatic Team spent a few minutes signing autographs, posing for group photos, and answering questions. “It’s a lot of fun, I’ll tell you that much,” Fordham said. “You set a goal and you go for it. You just don’t quit.”