Get the app Get the app
Already a member? Please login below for an enhanced experience. Not a member? Join today
News & Media Teen secures solo circumnavigation record in Skyhawk

British pilot Travis Ludlow, 18, secured a Guinness World Record as the youngest to fly solo around the world after he landed a Continental CD-155 Jet A-powered Cessna 172 at Booker Airfield/Wycombe Air Park in Marlow, England. News photos showed him holding an official record certificate after completing a circle that began at Teuge International Airport in the Netherlands. 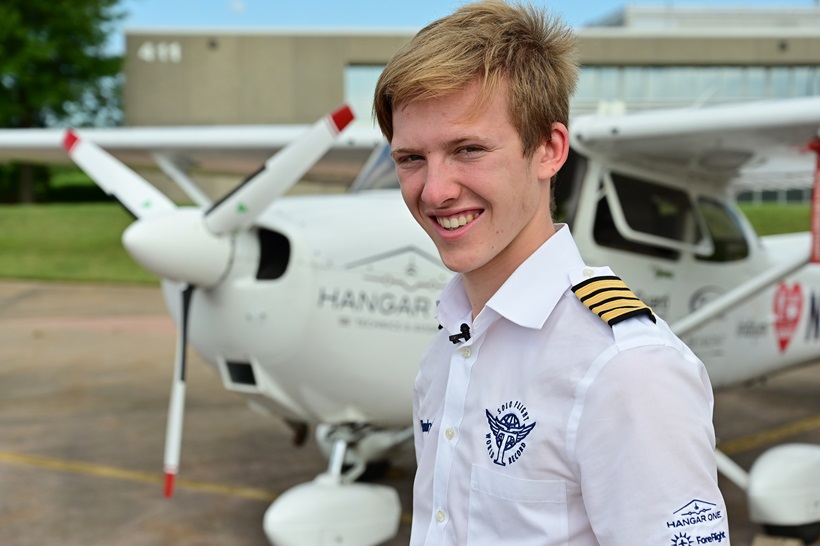 Ludlow, an instrument-rated private pilot who earned a glider certificate at age 14, was 18 years and 150-days-old when he emerged victoriously from the Skyhawk with his arms thrust into the air. A small crowd of family, friends, and well-wishers greeted the young pilot in person while a cadre of social media followers posted compliments via Facebook and Instagram. The 44-day journey through 16 countries and four continents surpassed by almost two weeks the record set by one of Ludlow’s mentors, Mason Andrews of Louisiana, who completed his own solo circumnavigation in a Piper Lance when he was 18 years and 163-days-old in 2018.

“Congratulations and enjoy the experience,” Andrews told AOPA, wishing Ludlow the best. “It’s a really long trip, so enjoy being back, and enjoy all the things that are going to come from this because it only happens one time.”

Andrews, now 21 and preparing to open a flight school in Monroe, Louisiana, said he was “glad to help” during the planning phases to instill in Ludlow the culture of traveling safely. He cautioned Ludlow about the “enormous pressure” that could accompany a record flight attempt and reiterated to him that “safety is first, as it is with all of aviation.” Andrews added that complications during such a long journey away from home can arise from tackling a variety of unfamiliar flying environments on your own. “A few times [during Ludlow’s flight] I reached out and told him, ‘The most important thing is for you to make it to your destinations safely,” and without incident. “I was happy to be able to do it for him.” 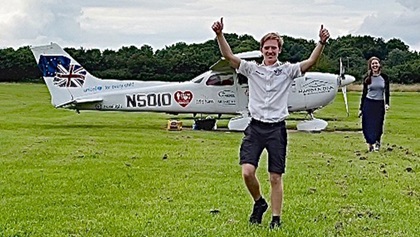 “That’s great news!” said earthrounder Shinji Maeda, 41, who praised the young pilot’s accomplishment. Maeda, a one-eyed pilot based at Snohomish County (Paine Field) in Everett, Washington, completed a similar journey June 11 in a modified Beechcraft Bonanza. Ludlow and Maeda tried to connect when they were both flying solo through Russia in June, but weather scrapped the attempted rendezvous.

Maeda said that “flying around the world is a serious deal” and cautioned other young pilots considering a solo global attempt to first gain proficiency, a mantra he learned from 2016 circumnavigator Adrian Eichhorn, of Virginia.

During the circumnavigation Ludlow said one of the biggest challenges was combatting the seclusion. “I miss all my friends, and my family, and my girlfriend as well. I miss flying with people in the plane. The whole time I’m by myself, sometimes it’s eight hours at a time. That’s probably the hardest part of the trip, the loneliness.”

Ludlow picked up the aircraft in the Netherlands, doubled back to England, then traveled east, over Europe, Russia, Alaska, and the continental United States before returning to his home airfield in Marlow, England. Along the way he visited AOPA headquarters in Frederick, Maryland, where the aviation community rallied to help him overcome a hotel check-in snafu because Ludlow was under 21. During a rest-day he praised on social media “the wonderful people who are helping me” reach the goal of becoming the youngest pilot to fly solo around the world.

After Maryland, Ludlow continued up the East Coast through Canada, Greenland, and over the Atlantic Ocean to Iceland. A six-hour flight across the North Atlantic from Reykjavik to Benbecula, Scotland, returned a grateful Ludlow to European shores July 6. A fire truck water spray signaled his arrival to Donegal Airport in Carrickfinn, Ireland. From there, he flew south to Cork, Ireland, to initiate a planned a flight to Morocco “just to say that I’ve touched Africa.” However, a global positioning system malfunction in the air sent Ludlow back to Cork Airport for repairs.

“Today I had my first failure in my aircraft, when I lost GPS on departure,” he wrote on Instagram July 8. “I thought it would resolve itself, but it didn’t, and I had to return to Cork. It turned out to be a broken antenna… must have been that Polar Bear incident in Narsarsuaq.”

After the maintenance, he continued south to Africa and then returned to the European continent via Algeria, France, Belgium, and the Netherlands. “What an amazing day I had yesterday,” he posted to Facebook July 10. “2 continents, 4 countries, 3 legs, 3 different views, the beautiful Mediterranean Sea. To top it all, an evening flight over the Pyrenees, my highest flight ever.”

On the eve of his final leg, Ludlow took time to congratulate Virgin Galactic founder Richard Branson for achieving space flight and the English soccer team for facing Italy in a European Cup showdown. With the circumnavigation complete, he thanked “the most amazing welcome from friends, family and well-wishers” and recognized them for the “amazing support” he received during the journey.