Pilots packed a pavilion for a briefing from AOPA leaders on the association's most pressing priorities and other current events at a Pilot Town Hall April 6 at the Sun 'n Fun Aerospace Expo in Lakeland, Florida. 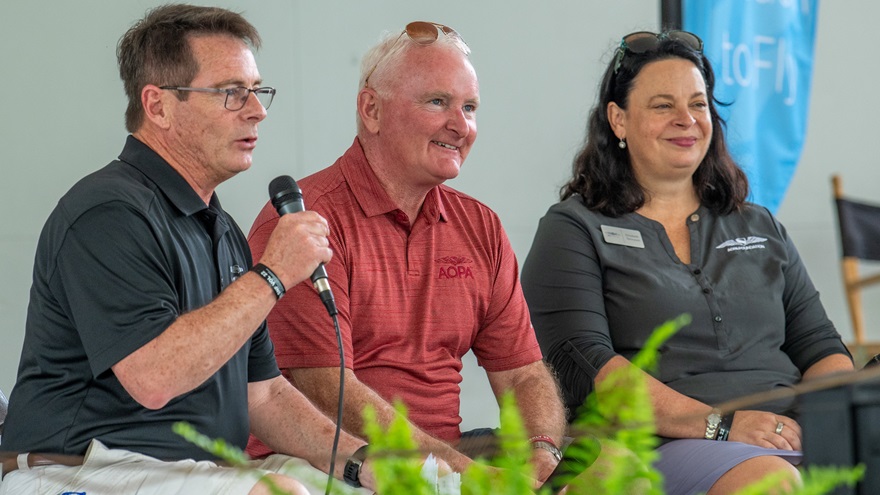 AOPA President Mark Baker started with good news for general aviation: “The state of general aviation is very strong,” Baker said, offering evidence of that strength in a few encouraging numbers: new pilot certificates, aircraft sales, and flight school enrollment numbers are all on the rise, even when compared with totals from years preceding the coronavirus pandemic.

While those are positive indicators of present conditions, the industry faces many challenges including the existential threat posed by the apparently inevitable elimination of lead from aviation fuel that is likely to happen by 2030, whether we are collectively ready for it or not.

Most top-of-mind among many issues, and one that affects every piston aircraft owner and pilot, is helping government and industry collaborate to achieve a safe and smart transition to making unleaded fuel available for all piston aircraft.

AOPA has collaborated with federal agencies and industry stakeholders for years, and most recently joined a broad effort with an urgent deadline: The EAGLE (Eliminate Aviation Gasoline Lead Emissions) coalition was announced by outgoing FAA administrator Steve Dickson in February, pledging to achieve the long-elusive goal by 2030. The coalition met soon after to chart a course forward that prioritizes sensible regulation, safety, and rapid distribution of whichever new unleaded fuel or fuels prove safe for widespread use. (AOPA has created an online collection of news and other resources related to the transition.)

Earlier in the day, Baker participated in another town hall event with Experimental Aircraft Association CEO Jack Pelton and General Aviation Manufacturers Association CEO Pete Bunce, where the message was reiterated. Baker noted that even if federal, state, and local governments were to relent on the broad-based push to eliminate lead emissions, there is only one facility in the world that still makes tetraethyl lead, and it is not expected to stay in business beyond 2030.

“If this was simple, it would have been done already,” Baker said.

AOPA Vice President of Government Affairs and Advocacy Murray Huling spoke about various other issues that his busy team is tackling, many of which AOPA members have asked us to prioritize:

“Our work for you continues in transparency, insurance, protecting flight training and local airports," Huling said.

On the also-important topic of aviation safety, AOPA Air Safety Institute Senior Vice President Richard McSpadden reported that GA safety is statistically at an all-time high, "but we can still be so much safer. On average, there are 1.5 fatal VFR into IMC accidents every month and preventing these incidents is our main goal for 2022."

ASI has compiled an online resource center where pilots will find podcasts, Safety Spotlights, and other resources.

"It all starts with good decision making and that is our focus this year,” McSpadden said.

AOPA is also working to build the total pilot population. Elizabeth Tennyson, senior vice president of the AOPA Foundation, who oversees the You Can Fly program, detailed the efforts (and success to date) encouraging more pilots to learn to fly or return to GA,  including the High School Aviation STEM curriculum now in use by more than 10,000 students in 44 states. Tennyson said she is “most proud of the fact that it reaches students who may not be exposed to aviation.”

Tennyson also touted the success of the Rusty Pilot’s initiative, which has successfully returned more than 10,000 pilots to the skies, and AOPA’s Flight Training Advantage, which helps make the flight training process more efficient and effective for students, CFIs, and flight schools.

Pilots in attendance had a chance to ask questions which covered how AOPA is addressing FAA designated pilot examiner shortages (an ongoing effort that AOPA has engaged with the FAA through an advisory committee) and the hangar shortage plaguing airports nationwide. AOPA Senior Vice President of media and marketing Kollin Stagnito also outlined the association's event strategy for 2022, including two fly-in Hangouts: September 9 and 10 at Felts Field in Spokane, Washington, followed by our Hangout on November 4 and 5 at Tampa Executive Airport in Tampa, Florida.

NTSB Vice Chairman Bruce Landsberg, who previously held McSpadden's job at AOPA's Air Safety Institute, closed out the event with Baker as they addressed aviation safety and the timeline of NTSB investigations.