Get the app Get the app
AOPA Members DO more LEARN more SAVE more - Get MORE out of being a pilot - CLICK HERE
News & Media Where musicians become legends, hot chicken, rooftop views

The setting sun illuminated historic brick buildings along "Music Row" as twin sisters Kelly and Sarah Finck cheerfully wrapped up an acoustic set atop Blake Shelton’s Ole Red rooftop lounge in downtown Nashville. A crowd swarmed Jason Aldean’s Kitchen and Rooftop Bar across (and four stories above) the street, and spilled onto the sidewalk while a mild summertime evening hugged the Southern city in the Appalachian foothills. 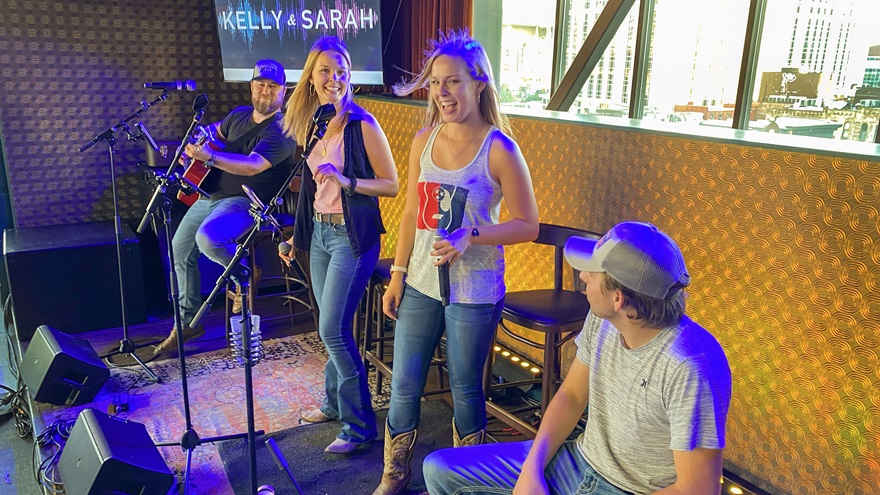 Kelly and Sarah Finck wrap up an acoustic set at country music performer Blake Shelton’s Ole Red rooftop lounge in downtown Nashville, Tennessee, in June. Photo by David Tulis.
The sound of music was everywhere—riding along with the aroma of barbecue from the Johnny Cash Museum and honky-tonk on Third Avenue, drifting in from a vocalist performing through open windows at the Sun Diner, and pounding from bands onstage at the raucous Bootleggers Inn double-decker moonshine bar.

Visitors to Nashville can keep themselves busy for days following in the footsteps of country music greats including Cash, Merle Haggard, Loretta Lynn, Hank Williams, Dolly Parton, Willie Nelson, and countless others.

Nashville is encircled on three sides by a natural escarpment indicating the start of the Highland Rim region of hilly land, and the Cumberland River splits the city. If you locate the river and follow its twists and turns from the east or the west, it will lead you to John C. Tune Airport, tucked into a 180-degree river bend just northwest of "Music City."

When approaching Tune Airport from the north, be vigilant to see and avoid the two very tall antenna towers reaching about 1,000 feet agl a few miles north of the Class D airfield. There’s a similarly sized tower southeast of it, too. Be mindful that the towers and the roiling hills contribute to a minimum VFR altitude of 2,200 agl when approaching this sector.

The Cumberland River to the west of 6,001-foot-long Runway 02 is a good place to line up a turn from base to final. Remember that Runway 20 has a right pattern to help protect pilots from the southside tower. Arriving VFR pilots should contact Nashville Approach on either 118.4 or 119.35, depending on direction of travel.

To the east of Tune Airport, pilots can spot the four runways (three parallel and one crosswind) of Nashville International Airport inside the Class C ring. Further east, Old Hickory Lake and J. Percy Priest Lake are excellent navigational aids. There are several alternate airports depending on which part of the city you need to access. Music City Executive Airport, Lebanon Municipal Airport, Smyrna Airport, and Murfreesboro Municipal Airport surround the metropolitan area.

If you appreciate music of any kind, it's likely you've heard of the Grand Ole Opry, a weekly American country music showcase founded in 1925 and one of Nashville's crown jewels. A who's who of musicians graced the halls of the 2,362-seat Ryman Auditorium on Fifth Avenue from the 1940s to the 1970s before the show moved to a larger venue. Elvis Presley, Cash, Bruce Springsteen, and the Steve Miller Band performed to sold-out crowds. More recently, Carrie Underwood, Darius Rucker, and Keith Urban brought modern country to a stage that proclaims performances that are "never rehearsed, and never the same show twice." Tour the facility to learn what happens backstage, walk in the footsteps of legendary musicians, and take a peek at the audience from show center. And don't forget to check the schedule for live performances and radio and television broadcasts. 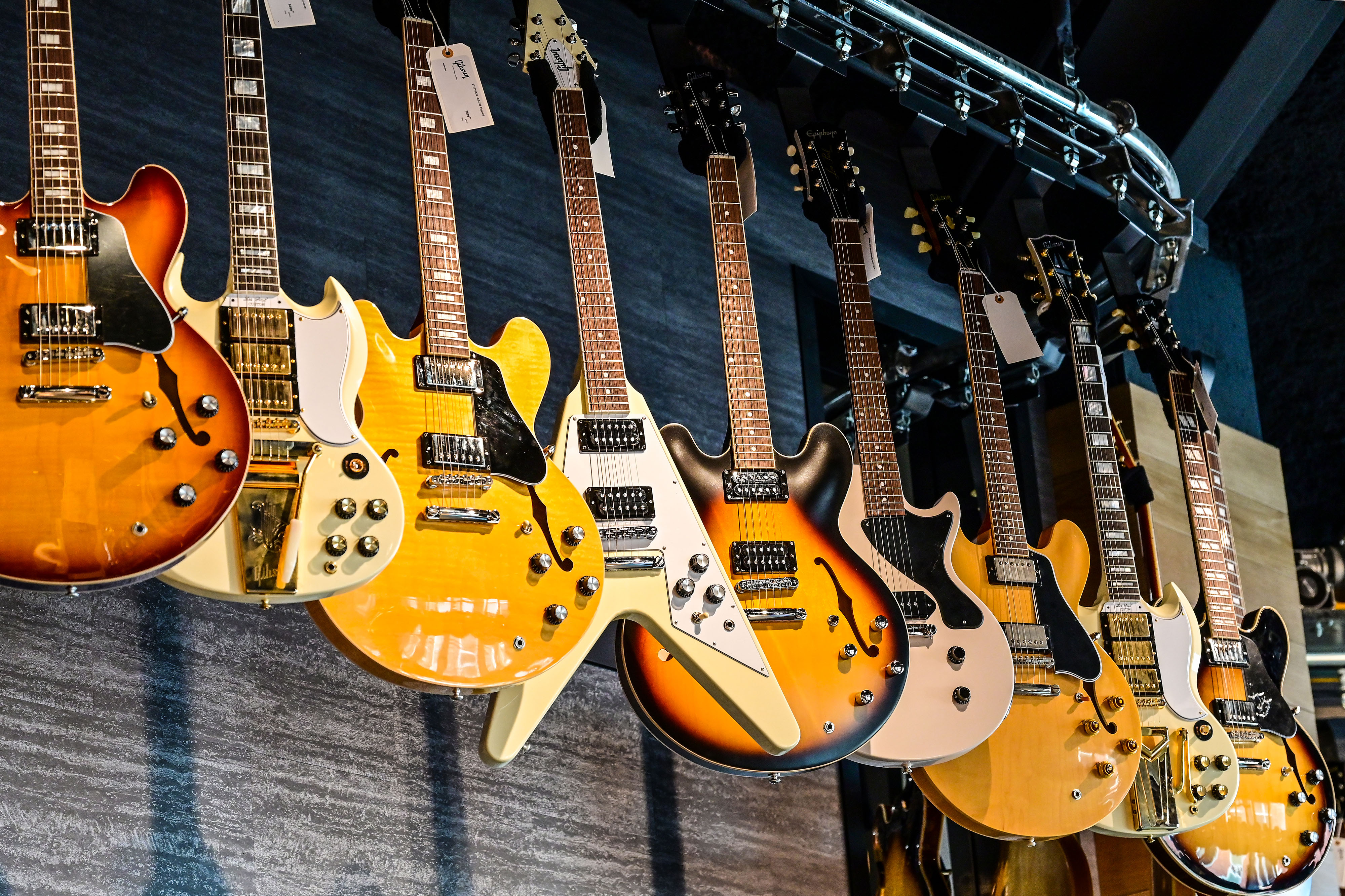 Myriad smaller entertainment venues abound in and around Broadway, a wide avenue defining the center of a Southern city that has risen above the traditional country music scene to encompass two professional sports teams, a convention center, shopping, dining, museum gazing, and a handful of universities highlighted by Vanderbilt, Belmont, and nearby Middle Tennessee State. Nearly 4,000 people attended Women in Aviation International's annual conference in March.

Dozens of pilot-musicians are based in or near the towered general aviation John C. Tune Airport including Dierks Bentley, Nick Hoffman, Tim McGraw, Alan Jackson, Paul Leim, "Banjo" Ben Clark, and "Big City" Brian Wright—who doubles as a cargo pilot when he's not performing. There's a good chance you'll spot one of these performers or others on the ramp or at the friendly Contour Aviation FBO, or hear their aircraft call signs on the radio.

When our family of three recently visited Nashville for daughter Lauren's Belmont college orientation weekend, line personnel greeted us with smiles, a tiedown spot for our Cessna 182, and a golf cart for our luggage. Inside the FBO, CFIs Amanda Straub and Jay Hannan served as front desk personnel and helped manage fueling, receipts, and rental cars when they weren't instructing.

Pilots flying into the area's six airports can base themselves as close to the action as they prefer but would be wise to note the annual Country Music Association Awards show in November that's broadcast from downtown's Bridgestone Arena, turning the GA airports into bigger hubs of activity than normal. College and professional football weekends can also be crowded.

The Kid Brother Sampler with pulled pork, beef brisket, macaroni and cheese, green beans, and bread is a lot of food for $25.49.

The tender and smoky pulled pork instantly won me over. Thin slices of brisket with a tasty bark are ready for your choice of six sauces. Sadly, a rush on ribs during a neighborhood bash eliminated the Big Brother Sampler from consideration, but there’s always next time.

The fried Nashville hot chicken tenders platter served with a medium hot sauce, Southern greens, and bacon cheese grits is a deal at $12. Wife Lisa preferred a leg/thigh combo and was quite pleased. She thinks she out-ordered me on the side dishes, choosing pimento macaroni and cheese plus baked beans, but the jury is still out on that.

Pro tip: Don’t order anything hotter than "medium" or you might spontaneously combust. If your teenage daughter decides to go with "hot" despite your admonitions, be forewarned that her chicken platter will soon become yours—if you can stand it—provided you have enough sweet tea to douse the fire.

Since 2014, Food Network celebrity chef Maneet Chauhan has delivered a winning combination of flavorful and aromatic Indian cuisine married to traditional Southern dishes at an unassuming brick and wood structure in the Gulch neighborhood.

Our family of three feasted on tender breaded calamari, tandoori chicken with basmati rice, masala braised lamb, curried lamb with rice, and a platter of garlic parmesan naan for about $90 all-in. We had enough leftovers from our evening splurge to fill three to-go boxes for an ample lunch before flying out the following day.

A thriving culinary cuisine includes the often imitated—but seldom duplicated—Nashville hot chicken dish made famous at Prince's Hot Chicken Shack. The recipe for success includes chicken bathed in hot sauce or sprinkled with cayenne, then breaded and fried or served grilled. The recipe has been spotted by pilots as far north as the Walmart in Oshkosh, Wisconsin. Lines to get into the original Prince's, Hattie B's quartet of hot chicken locations, or the downtown area's Party Fowl are virtually guaranteed. Locals strictly advise against ordering anything hotter than "medium;" otherwise, you'll be gulping down sweet tea like your pants are on fire. (Trust us on this one.) 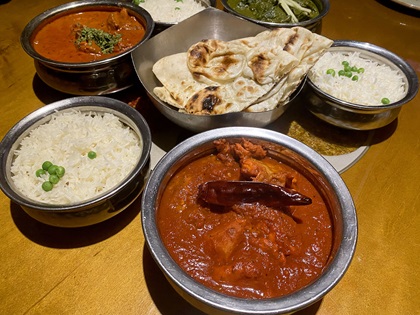 Southern barbecue joints also make a tasty appearance in Nashville with Peg Leg Porker, Martin's Bar-B-Que Joint, and Edley's Bar-B-Que among the favorites. Pulled pork, smoky beef brisket, turkey, and dry-rubbed ribs with traditional fixings are the go-to items. A medley of barbecue sauces from sweet to spicy can be added to the dry meat and local, craft-brewed beer is close at hand if you're not flying.

Aviators can witness the rise-from-the-ashes determination of John C. Tune Airport personnel after a devastating tornado tore through the area in on March 3, 2020, wreaking havoc on the airport. Property damage included metal hangars ripped from their foundations; dozens of single-, twin-engine, and jet aircraft destroyed or damaged; and fuel trucks set ablaze in the aftermath of the EF2 storm. More than two dozen residents lost their lives.

The airport authority has invested $38.5 million to rebuild the existing structures, added almost 80 new hangars, and refurbished the airfield since the 2020 storm.

Airport CEO Doug Kreulen in June told Main Street Nashville that it was "a labor of love" to rebuild the state's busiest GA airfield. 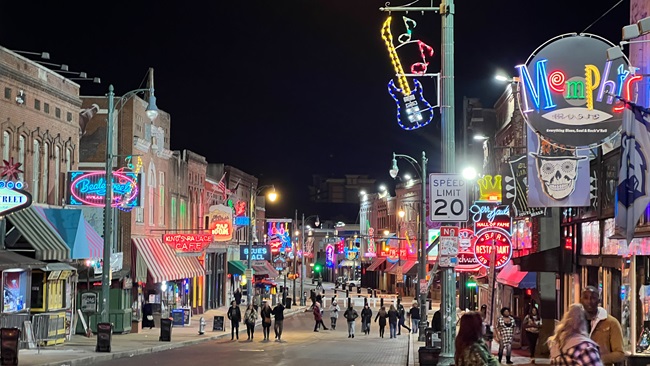