Get the app Get the app
Already a member? Please login below for an enhanced experience. Not a member? Join today
News & Media 'Real GA'

Friendly faces, and a strong community

Forty pilots turned up at Plymouth Municipal Airport on a sunny Thursday morning in May to welcome AOPA, chat for a while, and show off a few of their airplanes. There were easy smiles and warm greetings in the meeting room (also known to host movie screenings and safety seminars) as arrivals took their turn with coffee and doughnuts supplied by Tom Hurley, president of the Plymouth Aero Club. Hurley had put the word out that AOPA’s media team was in town to preview the airport that will host the July 12 Fly-In, and the pilots of Plymouth Municipal responded in numbers.

There was Lois Jordan, 88, who bought a Cherokee 140 and learned to fly at age 50. She worked for the telephone company at the time, and “the government wanted women in men’s jobs,” so her employer encouraged her decision to learn heating, ventilation, and air conditioning, and become a mechanic. “I’ve never been soft.”

With that accomplished, inspired by a circle of friends who enjoyed taking rides in light aircraft, “I went and I said, I’ll get a pilot’s license,” Jordan said. “It was fun.”

Jordan has earned deep respect from her fellow pilots at Plymouth Municipal, and they sought her out to say hello in turns. It was a diverse group—businessmen, professional pilots, the local police chief, to name just a few, and they all said they looked forward to welcoming AOPA pilots in droves.

“It’s great to have a fly-in here,” said Jim Alston, who added his 1947 Luscombe 8A to a clutch of aircraft being arranged for a photo. The Luscombe’s panel reflects few concessions to modernity: remove the portable radio, headset, and a mount for a portable GPS, and it is a panel little different, save the recent paint, than when it left the factory. Alston loves flying simple, if a tad on the slow side. He has logged trips to Sun 'n Fun (14 hours, one way) and EAA AirVenture (12 hours, one way), taking his time and enjoying the journey.

Jeannie Phillips is eager to show of her own pride and joy, a 1946 Cessna 140. A skydiver who “fell in love with old planes,” Phillips loves to fly with the windows open, and seeks out turf to land on. She also works for the town, coordinating airport operations on the staff led by Manager Thomas Maher, whose easygoing style is shared by the rest of the crew. Also the vice president of the Plymouth Aero Club, Phillips said Plymouth Municipal is a wonderful place to work.

“I feel I’m the luckiest person,” she said, noting that this airfield handles nearly the 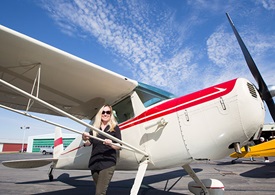 full spectrum of general aviation, from business jets to cranberry-toting helicopters to warbirds, classics, aerobatic aircraft, fire spotters, mosquito sprayers, police and medical helicopters, and trainers of both fixed-wing and rotorcraft varieties. Coast Guard and military aircraft occasionally drop in, and prices on the town-supplied fuel are competitive for the region. At any given moment, Phillips might be called on to “run out to a cool airplane at the pump.”

Resurgent in recent years, the Aero Club holds airshows every other year, with the next in September—headlined by Michael Goulian, who is based at Plymouth Municipal and will also present a seminar during the AOPA Fly-In. The club organizes flour drops and other events to raise money for aviation scholarships, giving thousands of dollars to aspiring pilots and mechanics. 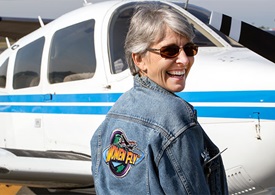 The airport dates to 1934, when an apple orchard was cleared to make way for a grass strip. The U.S. Navy took over in 1942, using the field as a satellite training field for pilots stationed at the Squantum Naval Air Station in Quincy, Mass. The federal government sold it back to the town for $1 in 1952, and today arriving aircraft find two paved runways to choose from (with instrument approaches including an ILS for Runway 6), two maintenance shops, four flight schools (three for fixed-wing, with one specialized in aerobatics, and one dedicated to helicopter training). In 2012, four of the primary airport gates were named for local pioneers who built Plymouth Municipal into what it is today.

Maher strikes a careful balance, maintaining order without discouraging fun. He is happy to approve flour drops, golf ball drops, charity shows, and the many other activities that draw crowds of pilots and nonpilots alike. A circus sets up on the large swath of lawn between the terminal and South Meadow Road. 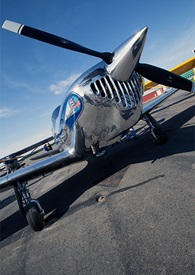 Maher said including the wider community in on-field activities encourages potential pilots, helps build general aviation—a mission that local pilots take as seriously as AOPA—and helps build on a solid foundation of understanding and mutual respect among the pilots and the airport’s neighbors, near and far. Pilots take care to respect noise abatement procedures and fly as good neighbors. The relationship between the town and the airport has not always been perfect—there was some opposition to a proposal to extend both runways to 5,000 feet, and that plan was scaled back in recent years. But Maher and fellow pilots (and other airport officials, who are also pilots) all spoke of a strong sense of community, both within the airport fence and within the town that continues to support its aviation hub.

“I like to see the kids’ faces pressed up against the chain link fence, checking out what’s going on,” Hurley said. “You can get up close and personal. People here are open. People talk to one another.”

AOPA pilots flying in July 12 should expect a warm welcome: Pavement may be present (and in good condition), but this airport has never strayed from its grass roots.

Camp out with your airplane and make new friends at AOPA’s Plymouth Fly-In. Camping will be available the nights of July 11 and 12. Plane Jane's Place will cater a meal on Friday from 6 to 8 p.m. (cost is $10 cash per person; no credit cards or checks for this particular meal option). Reservations are required in order to camp out. To reserve your spot and learn about the rules and responsibilities of camping at the airport, download the aircraft camping procedures.

There are also a variety of hotels and bed and breakfasts ready to welcome pilots who make this a weekend getaway. Visit Destination Plymouth County for details, and please register in advance for your free lunch (and an optional pancake breakfast).