Less than a year after Jack Wiegand circled the globe in a Mooney Ovation2 GX and earned a Guinness World Record as the youngest pilot to do so, an even younger pilot is preparing to launch from California with an equally ambitious itinerary. If Matt Guthmiller, 19, is able to complete his round-the-world trip in an A36 Bonanza by the time he turns 21, he’ll unseat Wiegand—who has been helping Guthmiller plan, according to Guthmiller’s blog—in the Guinness record book.

AOPA coverage of Wiegand’s 2013 flight inspired the Massachusetts Institute of Technology freshman from Aberdeen, S.D., who has outlined a flight plan that also aims to pay it forward, choosing Code.org as the beneficiary of an online fundraising drive. (Wiegand raised money with his own two-month journey for Big Brothers Big Sisters and Ag Warriors.) 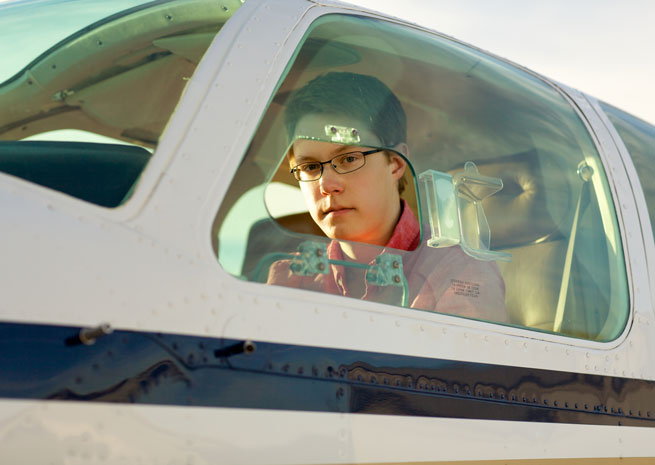 Code.org is a nonprofit organization dedicated to expanding access to computer science education in schools, particularly in underserved areas. Guthmiller, according to news releases and details posted online, began writing computer code in elementary school, launched one of the first iPhone unlocking businesses in 2007, and was writing algorithms to predict crude oil prices and using supercomputers to analyze stock trades while a student in high school.

“Setting a record is exciting, but records are made to be broken,” Guthmiller said in a news release. “My greatest goal with this flight is to inspire young people around the world to greater heights. In my experience, studying computer science builds critical problem solving skills and opens the mind to an infinite range of possibilities. Code.org is working to ensure that such an amazing tool is within the reach of every single student.”

Guthmiller aims to complete his journey in just over five weeks after departing May 27 (weather permitting) from El Cajon, Calif.

Guthmiller plans to head east, stopping first in his hometown, followed by a six-hour leg to Teterboro, N.J., with an itinerary that includes a pair of 14-hour legs crossing the Pacific on his way back to El Cajon. The 1981 Beechcraft has been fitted with ferry tanks to extend its range to 2,800 nautical miles. All but two of the Bonanza’s six seats have been removed for the trip, and the owner of the aircraft the teen will lease for the trip, Guthmiller notes in his blog, agreed to upgrade to a full glass panel in advance.

Wiegand logged 135.8 hours flying 21,000 nautical miles in 59 days last year; weather and administrative delays (and a forgotten passport to start the journey) pushed his arrival just past his birthday, making him 21 years and seven days old at completion.

Guthmiller, in his blog, said he was already contemplating an ocean crossing but had ruled it out as a practical possibility until the May 3, 2013, issue of AOPA ePilot, arrived. That edition includes an article about James Anthony Tan’s attempt on the same record (which linked to a story about Wiegand.)

“My mindset changed completely,” Guthmiller wrote in his blog. “Instantly, I knew that was something I wanted to do, and I emailed the article to my parents and a few close friends telling them as much. Of course, their first reactions were something to the effect of a facetious ‘good luck,’ but I was determined.”