Get the app Get the app
AOPA will be closed July 4th, in observance of the Independence Day holiday. We will reopen at 8:30 am ET on Tuesday, July 5.
News & Media Latitude rolls out 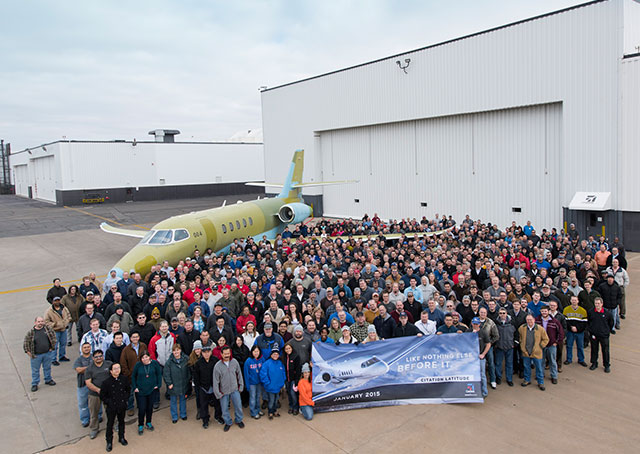 Cessna Aircraft has launched the first production Citation Latitude, at least as far as the ramp in front of the factory door, and the program remains on track for certification in the second quarter.

The Latitude was first announced in October 2011 and has exceeded initial performance expectations during a test program that has now logged 500 flights and 1,200 hours, the company announced Jan. 29. AOPA got a look at the forthcoming twinjet in September, when the 2,700-nautical-mile range (increased 200 nm from previous estimates in part by larger fuel tanks) was revealed, along with other performance enhancements, including short-field performance.

The $16.2 million Latitude is important to Cessna’s fortunes. Like most manufacturers, the company has seen sales decline in recent years, and the Latitude and Longitude (also in development) are expected to help the Wichita, Kansas, firm reclaim lost market share. Analysts have said Bombardier’s recent woes will likely spell more sales for Cessna and its parent, Textron Aviation.

Cessna staff assembled for a group photo after the first production Latitude emerged from the assembly line, eager to highlight this step forward.

“Our product investments extend beyond the design and performance features of the aircraft with innovations in our manufacturing processes,” said Scott Ernest, president and CEO, in a news release. “The Citation Latitude team has redefined what customers should expect from a business aircraft in this segment, while also redefining the aircraft build process.”

The Citation Latitude will carry up to nine passengers, can reach 43,000 feet in 24 minutes, and can maintain a cabin altitude of 6,000 feet up to its maximum operating altitude of 45,000 feet.