Get the app Get the app
Already a member? Please login below for an enhanced experience. Not a member? Join today
News & Videos No-fly map for drones 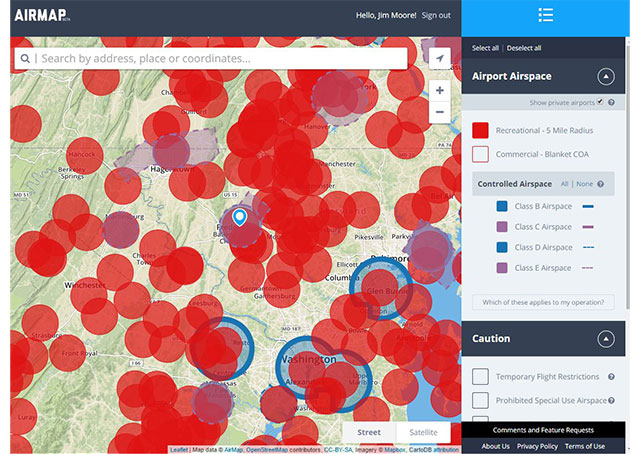 As encounters between manned and unmanned aircraft have increased in recent months, so too have the efforts to educate operators—particularly consumers with little or no aviation experience or expertise. The FAA announced in May it is developing a mobile application for drone users that will help them avoid airspace incursions, with testing to begin in the coming months.

That basic technology—a real-time mapping system that alerts unmanned aircraft operators to the presence of controlled airspace and other areas to avoid—arrived at the end of April with the public release of AirMap, a free, Web-based digital map that simplifies airspace for presentation to unmanned aircraft operators, created by a California company.

Accessible to any device with a Web browser, AirMap presents a view of nearby airspace allowing users to highlight various types of controlled airspace, and confirm they are outside of areas where unmanned aviation is prohibited or restricted. Aeronautical information is condensed to include only that which is relevant to low-altitude unmanned aircraft operations.

With technology that will allow unmanned aircraft to sense and avoid other aircraft still in the distance, government and private organizations are focused on operator education to prevent dangerous conflicts. The Know Before You Fly campaign launched in December by the Association for Unmanned Vehicle Systems International, Academy of Model Aeronautics, Small UAV Coalition, and the FAA offers facts and checklists for unmanned aircraft operators. (AOPA and other aviation organizations support this effort.)

AirMap has been initially configured based on the FAA-proposed rules that would govern unmanned aircraft operations, which AOPA commented on in April. Those rules have not yet been finalized. The unmanned aircraft industry is meanwhile booming, with revenue for military, commercial, and recreational models measured in billions and expected to grow significantly in the years to come. Keeping all of those unmanned aircraft out of harm’s way may be partly a matter of technology: NASA and Verizon are developing technology to sense and control drones using cellular networks, according to The Guardian; companies producing drones for the retail consumer are also working to hard-wire no-fly zones into the devices that would protect sensitive areas.

Operator education will remain a key component, said Robert Gonsalves, founder and CEO of the United States Association of Unmanned Aerial Videographers, a group founded in April 2014 that has already grown to more than 3,100 members— nearly all of them commercial or government operators of unmanned systems.

“I think the challenge for the industry is to educate new UAV owners at the point of purchase,” Gonsalves said. “If they don’t get that information up front when they buy the UAV, there’s a good chance they may never get it.”