Get the app Get the app
Get the latest news on coronavirus impacts on general aviation, including what AOPA is doing to protect GA, event cancellations, advice for pilots to protect themselves, and more. Read More
Already a member? Please login below for an enhanced experience. Not a member? Join today
News & Videos Signature announces new online fee program

In the midst of the National Business Aviation Association’s annual convention, Signature Flight Support, the world’s largest fixed-based operator (FBO), announced its intent to be more transparent with its new Trip Estimator tool set to be released in early 2020. While the news is an important step forward, it comes with some caveats, leaving pilots underwhelmed and a bit disappointed, said AOPA President Mark Baker. 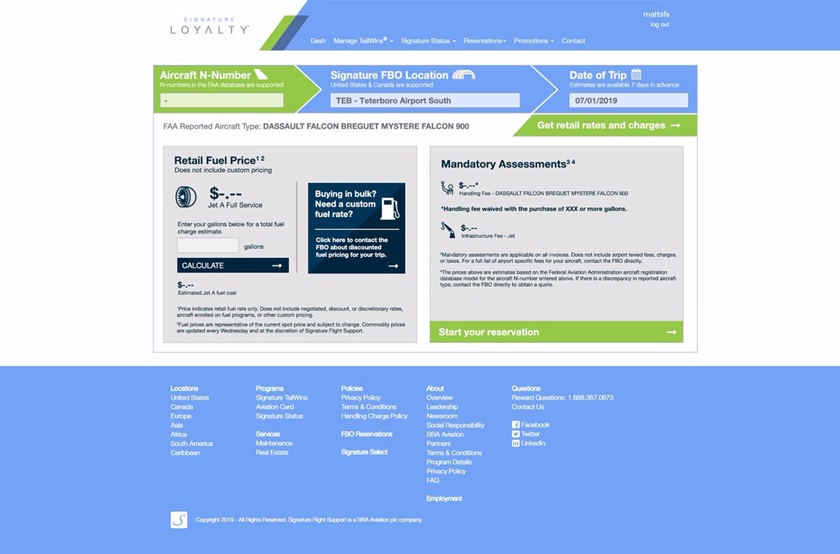 According to Signature’s October 23 announcement, the Trip Estimator tool will allow general aviation pilots to review the estimated costs of fuel, handling, and infrastructure fees up to one week in advance without having to call the FBO. But in order to access the fees, pilots must surrender their personal information, such as their tail number, and sign up for the company’s TailWins loyalty program. But even providing that information, members shouldn’t expect to pay the same price as their hangar buddies—rates are customized based on status.

On the first day of NBAA’s convention in Las Vegas, AOPA Senior Vice President of Media, Communications, and Outreach Tom Haines met with Signature COO Tony Lefebvre to discuss the new tool's capability, in which Lefebvre said pilots would be quoted based on the parameters the customer has with Signature.

“There’s value to customers that are in our hangars, and so we want to make sure we get the maximum value for those customers and the only way we can do that is to know who they are, to be able to provide them with the best discount,” said Lefebvre. “We also have fleet operators and people who fly multiple aircraft and so we want to make sure that they are getting the value they deserve based on the amount of business they do with us.”

According to Signature, the Trip Estimator was modeled after hotel and airline loyalty reward programs. However, most airline and loyalty programs don’t require you to be a registered member to see prices.

Over the course of AOPA’s dive into egregious fees, it became clear that FBOs that held monopoly positions on the field were the primary source of complaints. While most FBOs serve as vital components of our aviation infrastructure by providing aeronautical services to pilots, there will always be the outliers. In August 2017, on behalf of its membership, AOPA filed three Part 13 complaints at Illinois's Waukegan National Airport, North Carolina's Asheville Regional Airport, and Florida's Key West International Airport—all Signature Flight Support locations.

The intent of the Part 13 complaints was to urge the FAA to exercise oversight of airport sponsors to ensure that airports are in compliance with grant assurances meant to protect users from unreasonable and discriminatory pricing for aeronautical services.

The complaints garnered coverage from both local and industry media, including The Asheville Citizen-Times and The Key West Citizen, which reported on the lack of transparency. Plane and Pilot commended AOPA for its actions writing, “Hats off once again to AOPA for standing up for its members.”

Following the flurry of media attention, Signature released a statement saying it was committed to “fair and transparent pricing which supports the high levels of service and safety at all of the airports we serve.”

To better assess fair fees and lack of transparency at airports, AOPA formed its Airport Access Advisory Panel, consisting of current and former airport officials, industry experts, FBO owners, and executives. The panel continues to hold meetings to better discuss how the FAA, pilots, elected leaders, and FBO operators can work together to develop policies that support competition, access to airports, and FBO transparency.

The lack of FAA oversight on problem locations led AOPA and a coalition of 15 industry groups to issue a joint statement urging the agency to take action against egregious hidden fees and denial of affordable access to airport ramps. At EAA’s AirVenture 2018 in Oshkosh, Wisconsin, more than 1,000 frustrated pilots, including two members of Congress, signed AOPA’s petition reminding the FAA of its responsibilities. The petition called on airports to identify areas where transient pilots can park, without the services of an FBO. AOPA’s petition also urged the FAA to chart those locations giving pilots a choice when they land.

After months of AOPA calling on the FBO industry to be more transparent with fees, a small victory ensued. In October 2018, Signature published handling and infrastructure fees for piston aircraft at most of its U.S. locations. However, rates for parking, tiedowns, and security remained withheld. While it was a welcome move, turbine operators deserved the same information.

Meanwhile the Government Accountability Office began investigating the FAA’s oversight of certain FBOs at publicly funded airports to ensure that airports are in compliance with their grant responsibilities to charge fair, reasonable, and nondiscriminatory fees and prices.

Transparency began gaining traction following the joint release of “Know Before You Go” best business practices. Along with AOPA, a coalition of industry groups called on FBOs to enhance their operations by publishing an online list of prices, fees, and charges that pilots may face when landing at an airport.

Back at headquarters, AOPA staff was hard at work on revamping its Airport Directory as a one-stop portal for pilots and FBOs in its quest for fee transparency at airports. The directory includes new features where pilots can review and rate airport businesses including FBOs, maintenance shops, and flight schools, in turn encouraging pilots to get out and fly and allowing businesses to thrive via competition.

While the latest development with Signature is certainly welcome progress, there is still much more work to be done, said Baker.