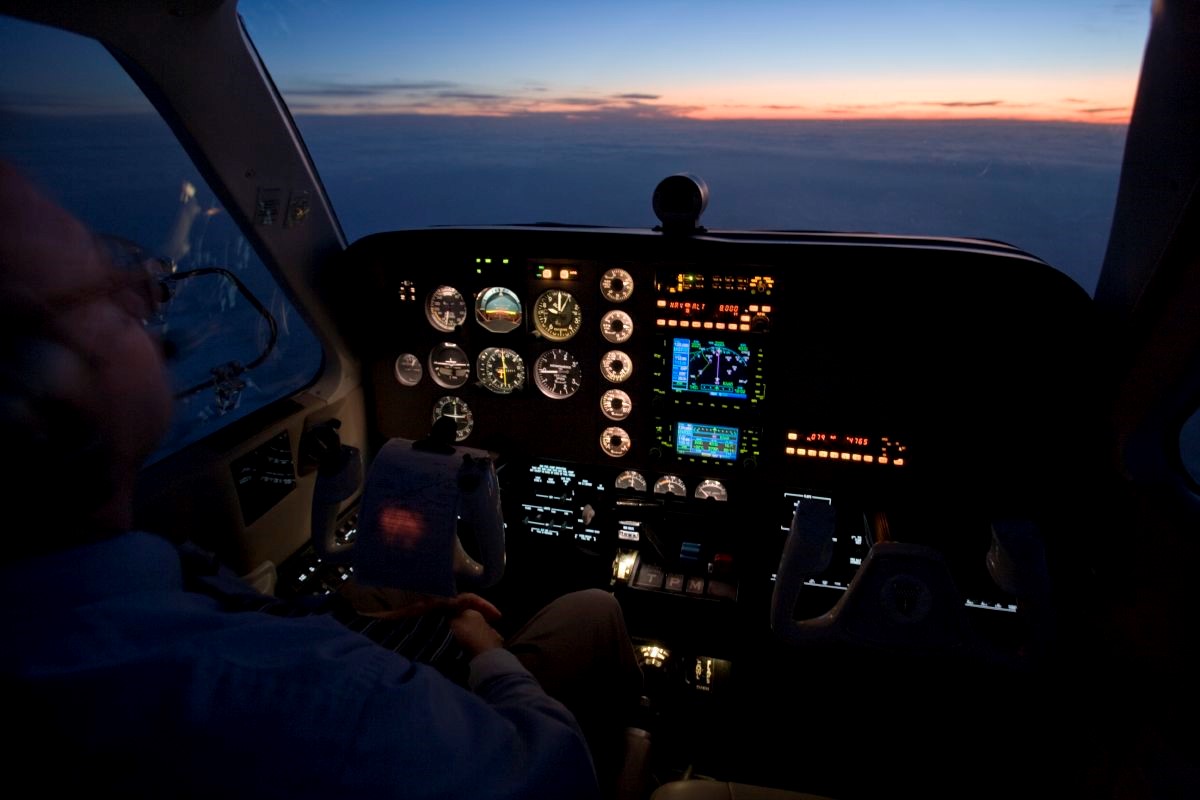 Risks vary with the environment we fly in. In many parts of the country, if you stayed on the ground every time marginal conditions or the possibility of thunderstorms were forecast, you wouldn’t fly very often. That’s where experience comes in. As we gain more experience and knowledge, we gain more confidence and expand our horizons. But this confidence also leads us into flight environments where the odds against us can rise, such as marginal VFR, night, and IMC. Add these factors to the flight environment, and the potential for spatial disorientation accidents increases. As the PIC, its your duty to manage that risk responsibly.

During a night flight in VMC from Orlando Executive Airport to Craig Municipal Airport in Jacksonville, Florida, the pilot of a Cessna 172 contacted Jacksonville Approach and requested VFR flight following. At 2142, the aircraft was identified and observed on radar at 2,600 feet, three miles south of St. Augustine, on a heading of 019 degrees, a course that would take it over the ocean. At 2145 the target was observed at 2,000 feet on a heading of 013 degrees. Thirty seconds later the aircraft was observed at 1,200 feet on a heading of 051 degrees, and its speed had increased from 104 to 126 knots. One second later the pilot radioed, “I haven’t any direction finder, I don’t see anything, one-five-six-ro--.” After trying to reach the pilot, at 2146 the controller radioed, “November one-five-six-romeo-alpha, radar contact is lost two and a half miles northeast of St. Augustine, ah, if you can hear me, ident.” The controller was unable to establish further contact with the pilot. The aircraft crashed into the Atlantic Ocean about 4.1 miles east of St. Augustine Airport. Weather at the time was reported as 3,500 scattered, visibility 10 miles. The night was moonless. The VFR-rated pilot, with about 100 hours of flight time, had received his license less than a week before the accident. The pilot’s body was recovered the following day, but the aircraft’s engine, wings, fuselage, and tail section were not located. A 100-hour inspection on the airplane, which had accumulated 151.9 hours total time before the flight, had been conducted about two weeks before the accident.

On descent toward Martha’s Vineyard Airport (MVY) in night VMC, a Piper Saratoga crashed into the ocean, killing the noninstrument-rated pilot and two passengers. The area forecast called for visibility of three to five miles and haze. No adverse conditions were reported. Visibility at MVY was reported as eight miles. Visibility on the mainland at the point where the aircraft turned toward the island was reported as three miles in haze. The accident sequence was reconstructed from radar tapes. The flight had originated at Essex County Airport (CDW) in New Jersey at about 2049 local time. After departure, the aircraft reached a cruising altitude of 5,500 feet and flew along the Connecticut shoreline until turning directly toward the island. At 2133, while over water about 34 miles west of MVY, the aircraft began a descent. Radar data showed the descent rate initially varied from 400 to 600 feet per minute. At about 2138, the aircraft began a bank in a right wing down direction. Thirty seconds later, the descent stopped at 2,200 feet and the aircraft began a climb that lasted another 30 seconds, stopping at 2,500 feet with wings level by 2138:50. At 2139 the airplane entered a left climbing turn to 2,600 feet, then began a descent that reached a rate of about 900 fpm. At 2140 the wings were leveled. Eight seconds later, the airplane banked in a right wing down direction and the bank angle, descent rate, and airspeed began to increase, with the descent reaching as high as 4,700 fpm. The last radar return, at 2140:34, showed the airplane at 1,100 feet. The wreckage of the aircraft was recovered about one-quarter mile north of the last radar return, in 120 feet of water. The pilot had a total of about 310 hours of flight time, including 29 hours in simulated IMC and 9 hours in actual IMC, and about 36 hours in the accident airplane. Pilots flying in the vicinity at the time of the accident reported that no visible horizon existed over the water. Accident investigators also noted that the pilot was recovering from a fractured ankle, which may have affected his ability to use the rudders and thus control the aircraft. Spatial disorientation was ruled the most likely cause of the accident.

Those accidents in VMC prove pilots don’t have to lose all outside visual reference to become disoriented. Spatial disorientation can and does occur in VFR conditions. Haze, darkness, or flying over water can also contribute to a loss of visual reference. In fact, flying over water on a moonless night is tantamount to flying in IMC. Even in daylight, pilots need to remember that marginal VFR, while legal to fly in, isn’t necessarily safe. Three miles of visibility doesn’t guarantee a visible horizon. Remember, “marginal” could refer to the forecast for your chances of survival, as well as the visibility.