Get the app Get the app
Get the latest news on coronavirus impacts on general aviation, including what AOPA is doing to protect GA, event cancellations, advice for pilots to protect themselves, and more. Read More
Already a member? Please login below for an enhanced experience. Not a member? Join today
Training & Safety Online Learning Weather Wise Air Masses and Fronts Fronts 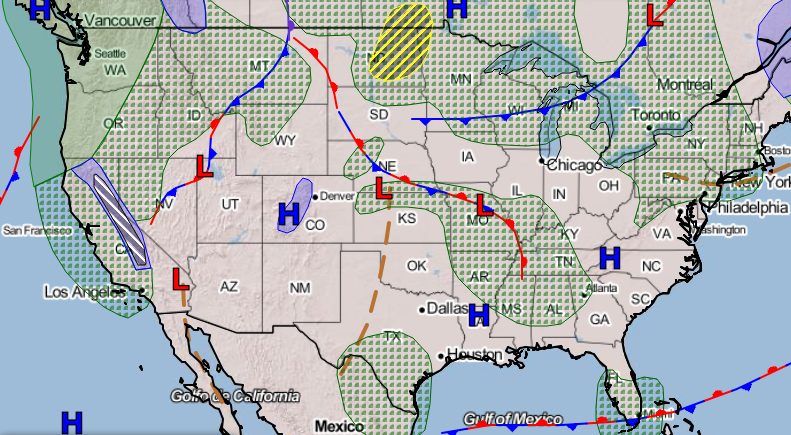 High To Low Look Out below!

Pressure difference ahead and behind a front can be significant. Monitor ATIS and ASOS/AWOS broadcasts and check onboard datalink weather or ATC reports for changes in altimeter settings. Especially after you cross a front, make sure you update the altimeter setting. If you don’t, you could be hundreds of feet higher or lower than you think you are—the latter means you may be flying closer to terrain and obstacles than is desirable.

Fronts often bring significant wind shifts. On the ground, seeing the windsock change direction is an obvious indication of frontal passage. To determine frontal passage in the air, watch for a change in your wind correction angle and look for changes in the outside air temperature. When you fly in the vicinity of a front, be sure to keep an eye on your groundspeed: If it drops significantly reevaluate your fuel reserves!

A front is the boundary line between two different air masses. The air masses' characteristics and how they move or don’t move determine the type of front. For example, the leading edge of a cold air mass moving toward a warmer air mass is called a cold front.

Winds often converge at frontal boundaries, and temperature and pressure differences can be significant on either side of a front.

Winds often converge at frontal boundaries, and temperature and pressure differences can be significant on either side of a front. So, if a front approaches, you can expect the weather to change. But realize that not every cold or warm front brings the exact same weather.

Fronts are identified by temperature, pressure, moisture, and other factors.

When a colder air mass starts to move along the ground, its leading edge is called a cold front. Because the colder, more dense air is heavier than the warmer air it’s displacing, it slides underneath, forcing the warm air to rise. The rising air cools to the dewpoint and forms clouds along the front. Thunderstorms will form if enough moisture and unstable air are present. A fast-moving cold front can also kick up severe squall line thunderstorms along or ahead of the actual front. Cold fronts typically move at 25 to 30 mph, but some can reach 60 mph.

A fast-moving cold front can also kick up severe squall line thunderstorms along or ahead of the actual front.

TIP: In most areas of the United States, cold fronts bring thunderstorms and other severe weather. In drier regions, the lack of moisture inhibits the development of severe weather, and cold front passage typically results in a wind shift and cooler temperatures.

When a warmer air mass moves, the leading edge is called a warm front. Because the warmer air is less dense, it travels up and over the cooler air below. This causes a temperature inversion with very stable, smooth air ahead of the front. If there’s enough moisture in the air, expect widespread stratus cloud coverage, steady rain, and icing in areas that are below freezing. A warm front has a gradual slope over colder air which can extend hundreds of miles ahead of the warm front’s surface position. Warm fronts typically move slower than cold fronts, at around 10 to 25 mph.

TIP: Weather charts only depict the front’s location at the surface. When you fly toward an approaching warm front, you may encounter the warmer, less dense air more than 100 miles from where it is charted on the surface.

When a faster moving cold front catches up with a slower moving warm front, an occluded front forms. An occluded front can have the weather characteristics of a cold or warm front, depending on the relative air temperature ahead of each front. Hazardous weather is likely if there’s enough moisture in the air.

Cold front occlusion—Occurs when the air associated with a fast-moving cold front is colder than the air ahead of a slow-moving warm front. The cold air replaces the cooler air and pushes the warm front aloft. The associated weather is typically a mixture of both warm and cold front weather.

When air masses have very different moisture levels, the boundary between them is called a dryline.

When opposing air masses have relatively equal pressure, they stop moving and the line tween them becomes a stationary front. Stationary fronts often bring cloudy, wet weather that can last a week or more.

TIP: When planning a trip, watch for stationary fronts forecast along your route. You could get delayed for several days!

When air masses have very different moisture levels, the boundary between them is called a dryline. This is common at the narrow boundary found in the Plains region between moist air from the Gulf of Mexico and dry continental air from the west. It is most often present during the spring, where it is often the site of thunderstorm development. Typically, the dryline advances eastward during the day and retreats westward at night. The imbalance of dry and moist air at the dryline can trigger severe thunderstorms and even tornadoes.

TIP: Pay close attention to ATIS and ASOS/AWOS reports ahead when you approach a dryline, as the weather can change quickly.

Thunderstorms: Occur if moisture, unstable air, and a lifting force are present in the right quantities. A cold or occluded front often triggers thunderstorms that may be part of a faster moving squall line along or ahead of the front. Thunderstorms can also be embedded in widespread precipitation north of a warm front. They can also occur in the unstable air behind the front as the upper level low moves over your route.

Low Ceilings and Visibilities: If you are instrument rated, current, and proficient, low ceilings and visibilities may not be an issue. Rusty IFR and VFR-only pilots, however, should regard these factors as a serious, potentially deadly combination.

Wind and Turbulence: Even in the absence of thunderstorms, dangerous turbulence and wind shear can accompany fronts. Additionally, a frontal passage can quickly change a headwind to a crosswind, complicating landings (particularly if there’s no crosswind runway at your destination).

Note: Consider your experience and proficiency levels and the equipment you’re flying to make a go/no-go decision. Also, talk to experienced pilots who are familiar with the area you plan to fly to. Once airborne, monitor the weather and don’t hesitate to modify plans if conditions are worse than expected.

Stationary Front—Cloudy and rainy weather that may last several days

TIP: You can see how the weather is changing by looking at METARs from airports on either side of a front.

Signposts in the Sky 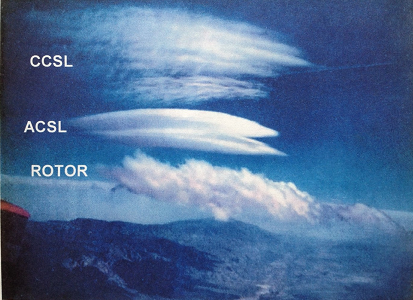 This occurs when there’s a change in wind directions and/or speed. Wind shear is often associated with thunderstorms or microbursts, but strong winds aloft and light winds at the surface may also cause wind shear.

Standing cirrocumulus lenticular clouds (CCLS) and altocumulus lenticular clouds (ACLS) signify the presence of a mountain wave and may present turbulence. Rotor clouds signify the presence of turbulence and should be given a wide berth. Similarly, any clouds that resemble crashing waves or appear as if they’ve been shredded indicate turbulence. Towering cumulus or cumulonimbus can also generate severe or extreme turbulence.
In this Section
Air Masses
Pressure Systems
Fronts
Weather Regions
Rules to Live By