Get the app Get the app
Get the latest news on coronavirus impacts on general aviation, including what AOPA is doing to protect GA, event cancellations, advice for pilots to protect themselves, and more. Read More
Already a member? Please login below for an enhanced experience. Not a member? Join today
Training & Safety Online Learning Weather Wise Air Masses and Fronts Weather Regions 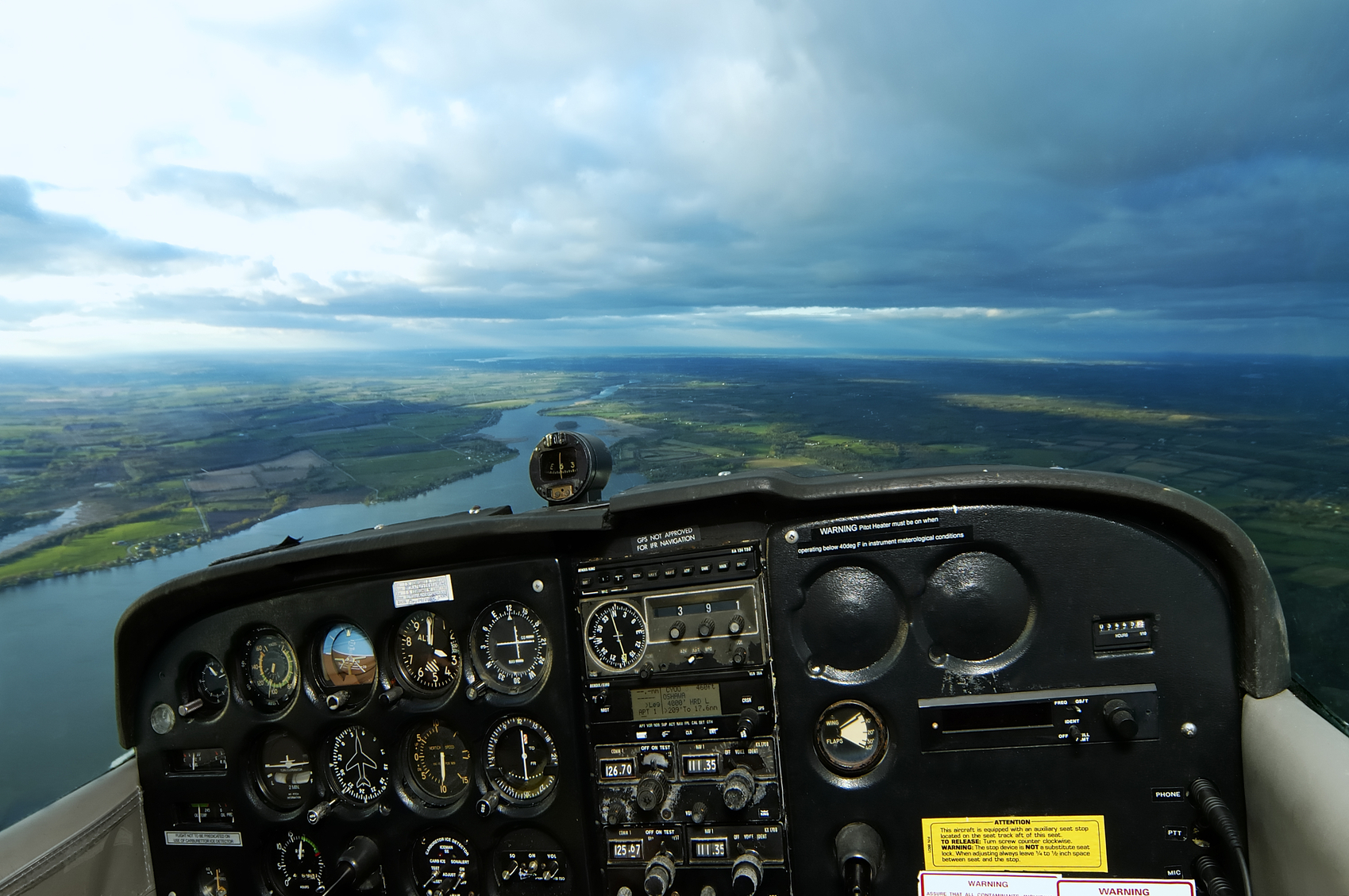 Getting the Weather Picture

Observing weather patterns for several days before you fly helps to provide the big picture on how frontal and pressure systems expect to be moving. This can be as simple as watching the weather channel or going online to review graphical forecasts. As you monitor the forecasts ahead of your flight, you’ll be better able to anticipate expected conditions, update your passengers on the likelihood of making the flight, and reach a reasonable go/no-go decision without undue pressure on the day of the flight.

Flight Service (1-800-WXBRIEF)—Contact flight service specialists (FSS) via telephone for outlook and updated briefings before your flight. They can be a great resource when you have general weather questions.

Different regions in the United States have unique weather characteristics. These are the most common, prevalent weather patterns and potential flying hazards that can be expected in each.

Winter—Moisture off the Pacific Ocean causes rain on the windward side of the mountains and snow on the leeward side. The coast can be cool and wet with fog and low ceilings.

Northern Rockies—Tend to have strong winds and turbulence. Summers can produce thunderstorms and prolonged heat waves. High density altitude is a major concern. Fall offers the best flying weather, though the snow tends to begin in mid-October.

Summers—Generally warm and dry in the desert, although thunderstorms and hail may be encountered. High density altitude is a major concern. Moisture from the Pacific Ocean, the Gulf of California, and the Gulf of Mexico triggers rain in the mountains. Many of these thunderstorms can be "dry thunderstorms" that produce lightning but no rain. In some cases these can produce nasty dry microbursts.

California—Coastal fog forms over land in the winter and migrates from the ocean in the summer.

Observing weather patterns for several days before you fly helps to provide the big picture on how frontal and pressure systems expect to be moving.

Summer and fall—Threat of hurricane landfall.

Winters—Near the Gulf, are mild with rain and morning fog due to low temperature-dewpoint spreads.

Summers—Warm and dry. Moisture from the Gulf of Mexico triggers occasional thunderstorms.

Winters—Very cold and dry. Blizzards are common due to cold air from the north and moisture from the Gulf of Mexico mixing in this region.

Low pressure systems form on the lee side of the Rocky Mountains and grow as they head east and are fed by moisture from the Gulf of Mexico.

Summers—Usually hot, humid, and rainy with air mass thunderstorms. The southern portion of this region is part of Tornado Alley.

Winter—Can be cold with lake effect snow near the Great Lakes. A low pressure system can bring heavy rain in the southern portion of the region and heavy snow in the northern portion.

Summers— Moisture from the Gulf of Mexico and the Atlantic Ocean causes hot and humid weather with rain and thunderstorms. Thunderstorms are typically pulse-type (single cell) that do not produce severe weather and usually last 20 to 30 minutes.

Summer and Fall—Hurricanes can pose a threat.

This region’s weather is influenced by its location between mountains and the ocean.

Summers—Warm and humid with heavy rain showers and thunderstorms. Expect low visibility due to haze. Morning fog forms due to easterly flow off the Atlantic Ocean and up the rising terrain of the Appalachian Mountains.

Winter—Can bring heavy snow and rain due to upper-level lows from the west and south. Instrument meteorological conditions and icing are common. Areas near the Great Lakes experience lake effect snow.

ATC, flight service, and onboard technology like weather radar and datalink are excellent in-flight weather resources to help assess if and how conditions are changing.

Alaska Southeast/Gulf of Alaska (Juneau, Ketchikan): Plenty of moisture along the coast causes low ceilings and lots of rain the entire year.

The value of satellite-delivered weather 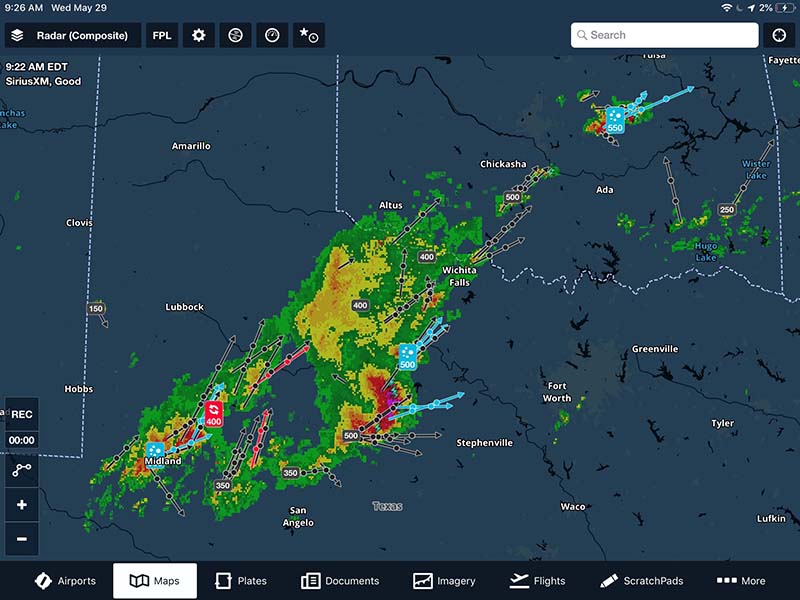 SiriusXM Aviation's satellite-delivered weather provides a number of benefits to pilots no matter where they are flying in the continental United States and southern Canada. Pilots are able to receive valuable weather information at any altitude and in remote locations like back country strips. The satellite delivery allows for consistent high resolution composite weather radar and features including cloud-to-cloud and cloud-to-ground lightning at faster updates than other datalink weather services. Plus the service provides other key features like storm tracks that allow pilots to see the projected speed and direction of a storm that may impact their route of flight. With satellite delivery and these key features, SiriusXM provides pilots with the right weather information at  500 feet or at their destination 500 miles ahead.

Forecasts are imperfect, but you can extract a lot of truth from them to make the best go/no-go decisions. When flying, compare the forecast to actual conditions and pay attention to trends. ATC, flight service, and onboard technology like weather radar and datalink are excellent in-flight weather resources to help assess if and how conditions are changing. Depending on your datalink provider and in-cockpit equipment, you can pull up graphical and textual weather that offer a clear picture of wind shifts, pressure changes, and temperature changes at altitude and at your destination. This together with what you hear from ATC or flight service and what you see outside the cockpit, greatly improves your situational weather picture aloft.

ADS-B or SiriusXM? What's right for you?

Watch and decide which product is right for your style of flying.

Get and Give PIREPS

Before your flight, ask pilots who have already flown that day about the conditions aloft. Was the forecast accurate, or have things changed?

When obtaining weather information, be sure to check for pilot reports (PIREPs). They are useful for determining actual weather conditions at altitude and between weather reporting stations. Be sure to give PIREPs, too.

TIP: Don’t worry about following the exact PIREP format. Just provide ATC or flight service with basic weather conditions and they’ll be able to convert the information into the proper format for dissemination.

You don't have to call up flight service to file a pirep. Air traffic controllers explain.