Get the app Get the app
Already a member? Please login below for an enhanced experience. Not a member? Join today
News & Media AirVenture digest

AOPA editors are on location at EAA AirVenture in Oshkosh, Wisconsin, throughout the show. We'll post stories, slideshows, and links to expanded coverage on this page throughout the big event, so check back often for updates and situational awareness! 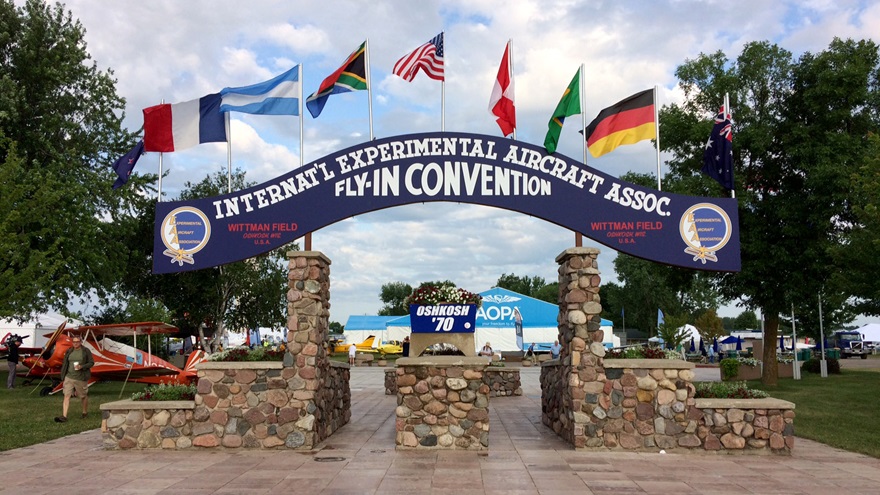 To mark the fiftieth consecutive EAA fly-in event in Oshkosh, the iconic Arch is brown on one side, but has been repainted its original blue on the side facing the runway–just as it appeared in 1970. Photo by Kollin Stagnito.

Updated July 30. Check out the Oshkosh news by section: Gear, Technology, Flight Training and Education and More News, and Events.

A week of celebration and innovation during EAA AirVenture at “The World’s Busiest Control Tower” attracted a flock of general aviation pilots and enthusiasts to Oshkosh, Wisconsin’s Wittman Regional Airport for the fiftieth time. Read more >

A long-neglected DC–3 was brought back to life in time for D-Day, and the Buffalo Airways crew brought the fruits of their labor to EAA AirVenture. Read more >

Riley Speidel flew a motorglider from coast to coast, aiming to inspire other youthful pilots. That would be less remarkable were she not 14 years old. Watch the video >

The legendary performer will fly her last show in October, and her last AirVenture this week. Read more >

Isn't that wheel on the wrong end?

Not everyone embraced CubCrafters' tricycle gear concept. A few taildragger aficionados cried "travesty," but some of us can't wait to get our hands on it. Read more >

AirVenture through the lens

Our photographers love the scenery as much as you do, lucky you. Read more >

The (aviation) stars line up

A new breed of aviator spreads the joy of flight (and sometimes the perils) to the YouTube generation with a mission to inspire, and AOPA gathered them together under our tent. Read more >

Imagine a stack of some 850 engine parts sitting next to a stack of 12 parts. That’s the difference that additive manufacturing or 3-D printing is making for GE Aviation as it spins out its new Catalyst Advanced Turboprop Engines for Textron Aviation’s Cessna Denali single-engine turboprop. Read more >

German manufacturer TQ Aviation made its U.S. debut with a communications radio and a Mode S transponder. The firm is well-known in Europe as well as in the commercial aviation world. Read more > 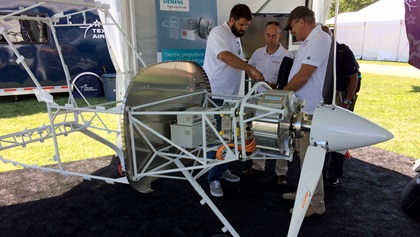 uAvionix is testing a version of its skyBeacon Automatic Dependent Surveillance-Broadcast solution that is designed to meet the requirements for the space-based ADS-B networks used over water, and in some foreign countries. Read more > 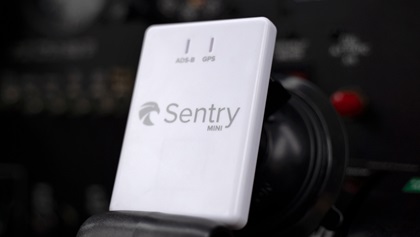 Sporty’s Pilot Shop debuted a $299 subscription-free portable Sentry Mini ADS-B Receiver with GPS that brings ADS-B weather and traffic into the cockpit. The device weighs less than two ounces and works with the popular ForeFlight app.

Airshow attendees can stop by the Trig Avionics display (booth 3130, Hangar C) to discuss and view Trig products and receive a special discount voucher that will be redeemable at approved U.S. Trig dealers.

Educational specialists Aviation Supplies and Academics (hangar B, booths 2075 to 2078) is paying tribute to the 1940 introduction of the Boeing 307 Stratoliner and ASA's eightieth anniversary with the cover of the 2020 Federal Aviation Regulations/Aeronautical Information Manual. A new rotatable iPad kneeboard, the latest test preps, and additional pilot training material and cockpit accessories will be available at ASA’s display.

Examples of the coming generation of vertical-lift aircraft made for urban mobility were center stage in the Innovation Showcase at EAA AirVenture in Oshkosh, Wisconsin. Not settled there, though, was the debate about how to power them. Read more > 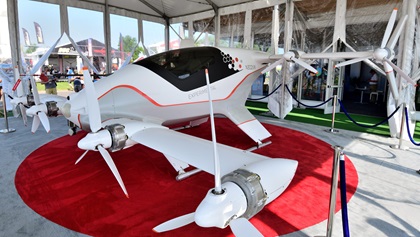 The future landed at the 2019 EAA AirVenture campus with the display of the Airbus prototype of a tandem tilt-wing Vahana electric vertical takeoff and landing aircraft. This nonflying example of the type of technology Airbus is developing brings to mind the era of The Jetsons, when Americans believed we’d all be like George Jetson and have our own personal spacecraft. The Vahana  has a single seat and is powered by eight 45-kW electric motors. Vahana means “carrier of a god” in Hindu. But Airbus notes this particular aircraft was never projected to actually fly and carry someone—it’s the learning process, a vehicle to learning if you will. 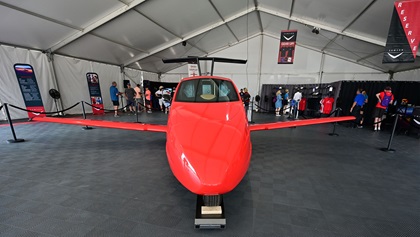 The Samson Sky Switchblade roadable aircraft drew a crowd to view its new orange paint job and digital Dynamic Dash that transforms from an automobile dashboard to an aircraft panel as wings sprout from the vehicle's flanks. Test flights prior to AirVenture were scrubbed, but Samson’s Cebron Walker promised the $125,000 base price vehicle would “fly within the next three or four months.” 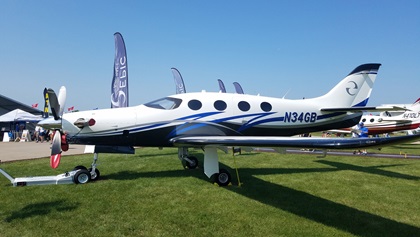 Epic Aircraft estimates it's only "a few months" away from certification of the E1000 turboprop, a factory version of the Epic LT kit. Read more >

Pipistrel and BendixKing are working together on a new trainer that includes an integrated flight deck designed to be intuitive for student pilots. Watch the video >

The FAA is opening the Low Altitude Authorization and Capability (LAANC) system to recreational drone users, the agency noted July 23. The system provides air traffic controllers with “visibility into where and when authorized drones are flying.” Read more >

Get to know your P&W PT6 engine

Pratt & Whitney launched Know My PT6, a data-rich app for turbine users that can help optimize the performance and availability of their PT6-powered aircraft. The Apple- and Android-optimized app includes service information, news alerts, videos, and customer care contacts. 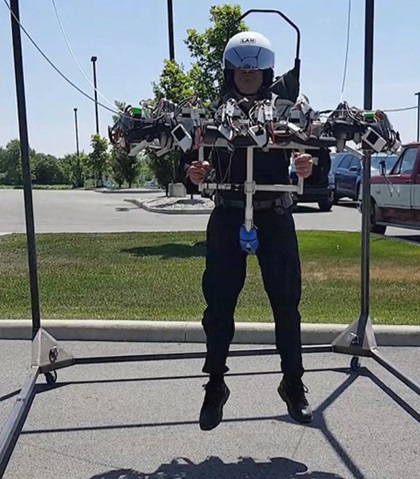 France-based flight simulator manufacturer Alsim, which is celebrating its twenty-fifth anniversary during 2019, will add a Lake Worth, Florida, assembly and support facility in September. The company's reconfigurable ALX flagship can transform into four classes of aircraft and 10 flight models, and the AL172 replicates the modernized Cessna 172SP four-person trainer with Garmin G1000 NXi avionics.

Electric Jet Aircraft (booths D-8 and D-9) will debut the EJ-1, a wearable battery-powered jetpack that weighs from 90 to 110 pounds depending on configuration and incorporates a single throttle controlling four thrusters. A previous design was entered into the GoFly prize competition sponsored by Boeing. 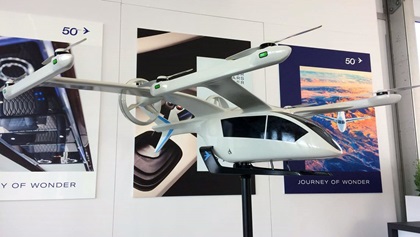 Own an electric ultralight for under $25K

Aeromarine LSA (booth 195), the company behind the Merlin personal sport aircraft, is introducing the Electrolite Ultralight, a $25,000 single-seat Part 103-compliant electric-powered aircraft with “feather-like sink rate” that can also be used as a self-launching glider.

Honda Aircraft Company CEO Michimasa Fujino said the company was proud to raise awareness for females in science, technology, engineering, and mathematics (STEM) by supporting the annual EAA GirlVenture Camp for young women in grades 9 through 12. About 70 youth networked with pilots and industry professionals, attended aviation-focused workshops, and participated in flight simulation activities.

Solo in the sim

Building basic instrument flying skills with the fundamentals is a mix of mind-bending challenge and mind-numbing monotony. Read more >

ATP Flight School added orders and options for up to 100 Cessna 172 Skyhawks through the year 2023 to supplement or replace the training facility’s 375-aircraft fleet across 36 U.S. locations.

A surge in demand for flight training around the world boosted sales of Piper trainers during the first half of 2019. Read more >

The Smithsonian National Air and Space Museum announced a $10 million donation from Textron will help transform the “How Things Fly” exhibition at the museum’s flagship building in Washington, D.C. Gallery construction is slated to begin in 2022, and the exhibit will feature a Cessna Skyhawk as its centerpiece, part of an interactive exhibit designed with upper-elementary and middle school students in mind.

Social media star Savannah Raskey flies from Florida to Oshkosh "under the hood" to work on her instrument rating. Find out what it's like for a young pilot to fly into the world's busiest airport for the first time. Watch the video >

Acting FAA Administrator Dan Elwell, a GA pilot, said he was looking forward to working with incoming Administrator Steve Dickson after the Senate voted July 24 to confirm the former Delta executive. “I went to school with him, he’s a great choice and he will be a great administrator,” Elwell said at a news briefing. “Steve is an operator like me, a lifelong pilot and airline executive.” Elwell, who steered the agency for 19 months, added that Dickson had additional procedural hurdles to clear but expected the FAA leadership change to occur “between now and August.” Read more > 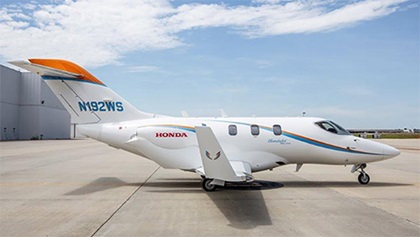 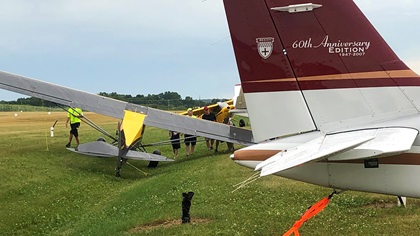 Weekend weather twisted two taildraggers tied down at nearby Appleton International Airport, one of the reliever airfields during EAA AirVenture. One aircraft was lifted and deposited in a drainage ditch, and another was relocated several feet by a violent thunderstorm that swept through July 20. Nearly five inches of rain fell at Wittman Regional Airport in the days prior to the July 22–28 event affecting vintage parking and other operations.

The eVTOL BlackFly that made an inaugural AirVenture appearance in 2018 will become a permanent fixture at the EAA Museum, the aircraft’s manufacturer Opener announced July 22. BlackFly aircraft have cumulatively flown over 23,000 miles during more than 2,300 flights. A production version of the aircraft will be on display at the Innovation Showcase.

Daily airshow performances at show center from 2:30 to 6 p.m. highlight the event’s fiftieth consecutive year at Wittman Regional Airport; a pair of night performances light up the sky from 8 to 10 p.m. on July 24 and 27. For a slower pace, check out the Fun Fly Zone for nightly twilight festivities with short takeoff and landing (STOL) demonstrations, ultralight flights, powered parachute pilots, and more, beginning at 8 p.m.

National Transportation Safety Board Chairman Robert L. Sumwalt, aviation investigators, researchers, specialists, and safety advocates will be presenting NTSB safety topics during AirVenture on how general aviation pilots can “Raise the Bar of Your Safety Culture.” The times and locations vary.

Textron Aviation is marking the fiftieth anniversary of the Beechcraft Baron high-performance piston twin’s first flight on June 23, 1969, with a Beechcraft Baron G58 displayed at the Textron campus (booths 78 to 82 and 100 to 123). More than 3,100 Barons have been delivered worldwide since production began in 1970. 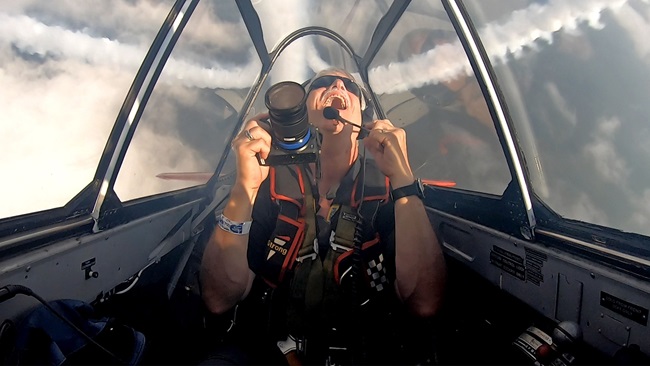